Curiosity Mars Rover as Seen from Orbit by MRO 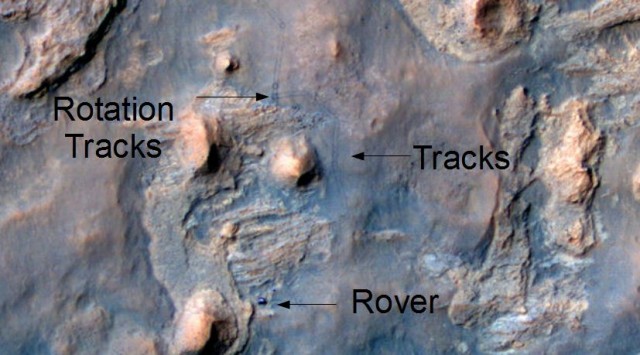 This image taken from Mars Reconnaissance Orbiter shows the rover as well as the tracks it made in traveling to  a rock layer surrounding the base of a small butte, called “Mount Remarkable”. Interestingly you can also see the points where the rover stopped to pivot and turn as it rotated to navigate.

The butte stands about 16 feet (5 meters) high. Curiosity’s science team refers to the rock layer surrounding the base of Mount Remarkable as the “middle unit” because its location is intermediate between rocks that form buttes in the area and lower-lying rocks that show a pattern of striations.

Depending on what the mission scientists learn from a close-up look at the rock and identification of chemical elements in it, a site on this middle unit may become the third rock that Curiosity samples with its drill. The rover carries laboratory instruments to analyze rock powder collected by the drill. The mission’s first two drilled samples, in an area called Yellowknife Bay near Curiosity’s landing site, yielded evidence last year for an ancient lake bed environment with available energy and ingredients favorable for microbial life.

The rover’s current location, where multiple types of rocks are exposed close together, is called “the Kimberley.” Here and, later, at outcrops on the slope of Mount Sharp inside Gale Crater, researchers plan to use Curiosity’s science instruments to learn more about habitable past conditions and environmental changes.