(4 out of 5 Stars) Transcendence as a movie has some very good acting and the special effects are first rate. Before I go to far there will be some spoilers later in the review but I will warn you. If you don’t want to know to much about the movie stop reading at the spoiler alert! 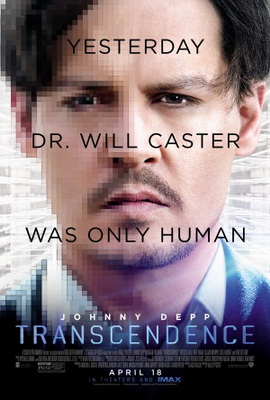 The basic plot as you may have seen is about a man who is dying, played by Johnny Depp. He has his brain mapped and uploaded to a computer. This computer has many quantum cores which was a nice technology touch, being as in theory these are incredibly powerful but we have not yet mastered them. In any case the movie is almost 2 hours long but I found myself engrossed in the movie and was not at all bored or un-entertained during the movie. There is some artistic license taken with respect to a few things. For example in the movie they put copper mesh on the roofs to prevent any electronic eavesdropping or connections. In the movie when you stand under this your phone or other device instantly looses its signal. Oh how I wish this were true. Theaters would simply have to put a copper mesh in the ceiling to stop people from accessing their phone during a movie and disturbing everyone. But alas it is not so. What they were taking liberties with was the construction of a Faraday cage. This indeed does stop electronic transmissions but requires one to be totally enclosed in the cage. Not just under a copper mesh roof. In point of fact any metal will do and you don’t have to use copper. But this is a small point. The movie holds together well and really starts one thinking about our future and how we will interact with technology…and how it will interact with us. Ok time for the spoiler alert. In short go see the movie. It is well worth seeing and will get you thinking about mankind, as well as our future. Now for the spoilers.

In the movie the main character dies but before he does his brain is mapped. This is then imported into a powerful computer matrix which in effect becomes him. It has his memories, his beliefs, his personality. In life he was a computer programming genius which the new intelligence takes advantage of re-writing it’s own source code, becoming ever more powerful. But as in all good man vs machine dramas the benevolent machine does not long stay that way. As he, or better put the computer, achieves self awareness and conciseness it longs for more. Aka. The Terminator movies, it looks to the internet as this resource and a place to make it’s new home. No it is not Skynet and set to destroy mankind, this new artificial intelligence seeks to help mankind. This is where the plot gets interesting. The time frame is slightly in the future so there are some technologies we do not yet have but it is not so far into the future as to be totally removed from our current reality or understanding of what is technically achievable. For example the machine that is Johnny Depp’s character finds a way to create nanobots which are capable of repairing the human body. When these nanobots are cut off from a signal from the main computer they cannot function any longer. This to me makes perfect sense. The nanobots have no capability to have any real programming or decision making but are simply a tool and sensors for the larger consciousnesses. Guided under that control they can repair almost any damage to the human body. The down side in the movie is that once integrated into the body they also have the capability to guide the human..it was not clear if the choice to obey was one the human had or not, when they were acting on the behalf of the machine.

In any case with some not so great leaps in the technology we have today the concept of these nanobots acting as sensors and tools under the control of a computer that could accurately treat and diagnose injury and illness seemed totally plausible, It really seems that when this happens, not if, it will be a great benefit to mankind. That said when we have evolved our processors and computers to be capable of this we also will be very close to the point where they will indeed, with just a little help, become self aware. Should we do this? Can we stop it? Should we stop it? All good questions. In the movie there is a group which believes we have to stop it to save mankind. They live in the woods, under copper roofs, trying to find a way to kill the machine.

The movie has many great technology twists and uses, which if you look closely will really get your mind working….and perhaps make you a bit worried. I recommenced you go see this movie, it is one of those movies that puts as more realistic scientific spin on technology and the future.