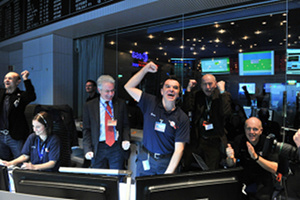 Team cheering at ESOC after successful signal is received from Rosetta. Credit: ESA

Not communicating with a spacecraft for an extremely long time. Normally regular health checks are made just so you know the spacecraft is ok. This is fine unless you have a solar powered spacecraft that was very far from the sun. This was the case with Rosetta and ESA heard from its distant spacecraft for the first time in 31 months.

Rosetta is chasing down comet 67P/Churyumov-Gerasimenko, where it will become the first space mission to rendezvous with a comet, the first to attempt a landing on a comet’s surface, and the first to follow a comet as it swings around the Sun.

Unlike many NASA deep space missions which use nuclear power Rosatta uses solar energy alone, The spacecraft was in effect turned off on June 2011 as it cruised out to a distance of nearly 800 million km from the warmth of the Sun, beyond the orbit of Jupiter. Now that it is 673 million km from the Sun enough energy can be generated to power the spacecraft fully again.

Rosetta’s pre-programmed internal ‘alarm clock’ woke up the spacecraft. After warming up its key navigation instruments, coming out of a stabilizing spin, and aiming its main radio antenna at Earth, Rosetta sent a signal to let mission operators know it had survived the most distant part of its journey.

The signal was received by both NASA’s Goldstone and Canberra ground stations at 18:18 GMT/19:18 CET, during the first window of opportunity the spacecraft had to communicate with Earth. It was immediately confirmed in ESA’s space operations center in Darmstadt and the successful wake-up announced via the @ESA_Rosetta twitter account, which tweeted: “Hello, world!”

“We have our comet-chaser back,” says Alvaro Giménez, ESA’s Director of Science and Robotic Exploration. “With Rosetta, we will take comet exploration to a new level. This incredible mission continues our history of ‘firsts’ at comets, building on the technological and scientific achievements of our first deep space mission Giotto, which returned the first close-up images of a comet nucleus as it flew past Halley in 1986.”

“This was one alarm clock not to hit snooze on, and after a tense day we are absolutely delighted to have our spacecraft awake and back online,” adds Fred Jansen, ESA’s Rosetta mission manager.

“All other comet missions have been flybys, capturing fleeting moments in the life of these icy treasure chests,” says Matt Taylor, ESA’s Rosetta project scientist. “With Rosetta, we will track the evolution of a comet on a daily basis and for over a year, giving us a unique insight into a comet’s behavior and ultimately helping us to decipher their role in the formation of the Solar System.”

But first, essential health checks on the spacecraft must be completed. Then the eleven instruments on the orbiter and ten on the lander will be turned on and prepared for studying comet 67P/Churyumov-Gerasimenko.

“We have a busy few months ahead preparing the spacecraft and its instruments for the operational challenges demanded by a lengthy, close-up study of a comet that, until we get there, we know very little about,” says Andrea Accomazzo, ESA’s Rosetta operations manager.

Rosetta’s first images of 67P/Churyumov-Gerasimenko are expected in May, when the spacecraft is still 2 million km from its target. Towards the end of May, the spacecraft will execute a major maneuver to line up for its critical rendezvous with the comet in August.

After rendezvous, Rosetta will start with two months of extensive mapping of the comet’s surface, and will also make important measurements of the comet’s gravity, mass and shape, and assess its gaseous, dust-laden atmosphere, or coma. The orbiter will also probe the plasma environment and analyse how it interacts with the Sun’s outer atmosphere, the solar wind. 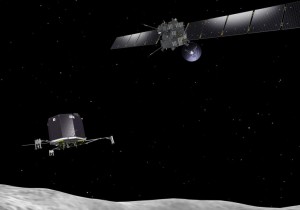 Artist’s concept of the Rosetta satellite and the Philae lander. ESA–J. Huart

Using the these data, scientists will choose a landing site for the mission’s 100 kg Philae probe. The landing is currently scheduled for 11 November and will be the first time that a landing on a comet has ever been attempted.

In fact, given the almost negligible gravity of the comet’s 4 km-wide nucleus, Philae will have to use ice screws and harpoons to stop it from rebounding back into space after touchdown.

Among its wide range of scientific measurements, Philae will send back a panorama of its surroundings, as well as very high-resolution pictures of the surface. It will also perform an on-the-spot analysis of the composition of the ices and organic material, including drilling down to 23 cm below the surface and feeding samples to Philae’s on-board laboratory for analysis.

The focus of the mission will then move to the ‘escort’ phase, during which Rosetta will stay alongside the comet as it moves closer to the Sun, monitoring the ever-changing conditions on the surface as the comet warms up and its ices sublimate.

The comet will reach its closest distance to the Sun on 13 August 2015 at about 185 million km, roughly between the orbits of Earth and Mars. Rosetta will follow the comet throughout the remainder of 2015, as it heads away from the Sun and activity begins to subside.

“We will face many challenges this year as we explore the unknown territory of comet 67P/Churyumov-Gerasimenko and I’m sure there will be plenty of surprises, but today we are just extremely happy to be back on speaking terms with our spacecraft,” adds Matt Taylor.