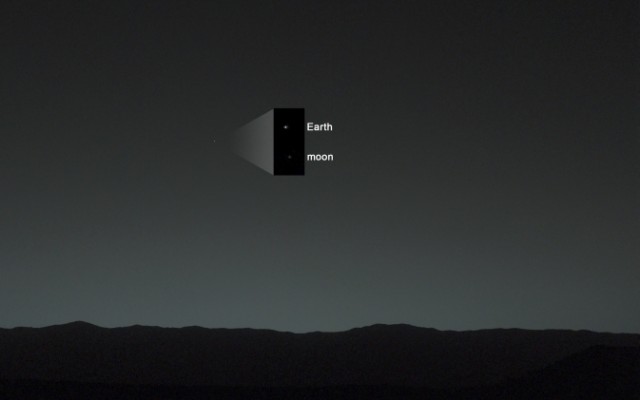 This view of the twilight sky and Martian horizon taken by NASA’s Curiosity Mars rover includes Earth as the brightest point of light in the night sky.
Image Credit: NASA/JPL-Caltech/MSSS/TAMU

New images from NASA’s Curiosity Mars rover show Earth shining brighter than any star in the Martian night sky. The rover’s view of its original home planet even includes our moon, just below Earth.

The distance between Earth and Mars when Curiosity took the photo was about 99 million miles (160 million kilometers).

NASA’s Mars Science Laboratory Project is using Curiosity to assess ancient habitable environments and major changes in Martian environmental conditions. JPL, a division of the California Institute of Technology in Pasadena, built the rover and manages the project for NASA’s Science Mission Directorate in Washington.