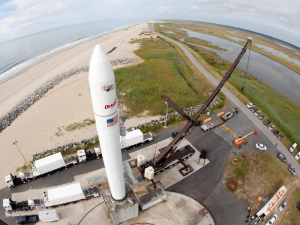 Late next summer NASA’s Goddard Space Flight Center plans to launch a mission to the Moon, not from Kennedy or Vandenberg, but from the new MARs  launch complex located at Wallops Island Virginia. This will be a first lunar launch for the new GSFC MARs complex as well as the maiden flight of the new Minotaur V rocket.

The mission is called the Lunar Atmosphere and Dust Environment Explorer (LADEE). The goal will be to determine the global density, composition, and time variability of the fragile lunar atmosphere before it is further perturbed by future human activity. In addition it will determine the size, charge, and spatial distribution of electrostatically transported dust grains and assess their likely effects on lunar exploration and lunar-based astronomy.

This new launch facility is exciting for those located in the north eastern United States as the launches will be seen as far away as Washington DC. The first use of this new site is scheduled for early next year with a launch to resupply the Space Station.

The Minotaur V rocket is Orbital Science Corporation’s new 5-stage vehicle. It uses three decommissioned Peacekeeper ICBM boosters combined with commercial motors on the upper two stages. This rocket will be substantially larger and more complicated than systems previously launched from the Range.