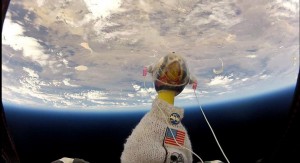 A group of middle and high school students know as Earth To Sky Calculus placed a rubber duck on at weather balloon and sent him into space. According to their Facebook page “Earth to Sky currently plans to launch this satellite in the fall of 2012, whose purpose will be to photograph the inside of the Northern Lights. Our weather balloons were a method to conduct some tests in similar conditions to what our satellite would be experiencing. We will also conduct an astrobiology experiment that will test the capacity of extremophile microbes to survive in harsh conditions, led by entomologist Dr. David Herbst. ”

Tha launch was timed to honor the launch of Voyager 1. Voyager One Commemorative Balloon Flight and Recovery Photos are here on their Facebook page. The Rubber Duck Astronaut reached an altitude of about 120,000 feet when this picture was taken. Congratulations to this enterprising group of young engineers and scientists!