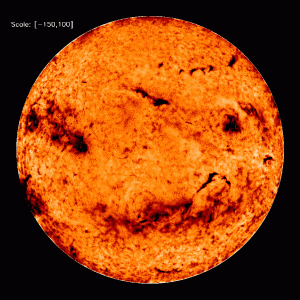 Huge sun spots can be seen in this image of the sun on September 7, 2012

Looking at this image of the sun from solisHE you can see significant sunspots poised to create CMEs,, and solar flares at any moment. While there have been some storms and space weather recently it looks much worse than it is. There are currently multiple large storms on the surface of the sun that quite frankly make for the scarist looking sun that we have seen in some time. Thus far this year there have been zero days without subspots. With the year almost over we can compare that to 2011 with only two, 2010 with 51 and 2009 had 260.

Hopefully the suns bark remains worse than it’s bite as we get past this phase of solar activity and there are no major earth directed flares. If you were to judge it by looking at this image you might be a little worried. NOAA does not predict any geoeffective flares for at least the next few days.