“I put the investigation in the Phobos-Grunt crash case under personal control. I scheduled a meeting on the issue at the Khimavtomatika design bureau in Voronezh on January 31”.

The Phobos-Grunt debris fell down in the Pacific, 1,250 kilometers west of the Wellington Island (Chile) on Sunday, sin a statement from Air Space Defence Troops Col. Alexei Zolotukhin .

“I expect from the Federal Space Agency a promised report on the reasons for the Phobos-Grunt crash, the names of culprits and an overview on the prospects of development of the space industry through 2030,” Rogozin underlined.

It will be interesting to watch as the Russians attempt to find the root cause and then decide how to punish them.

20:14 GMT The Russian Phobos-Grunt probe has reentered the atmosphere and crashed in the Pacific Ocean, 1250 km off the coast of Wellington Island. Roscosmos and USSTRACOM both announced the 1745 GMT reentry within minutes of each other.. Phobos Grunt landed in water 1,250 kilometers (775 miles) west of Wellington Island in Chile’s south, the Russian military Air and Space Defense Forces said in a statement. Reports state some debris did hit land, RIA Novos cited Russian ballistic experts who said that fragments entered over a patch of Earth’s spreading from the Atlantic and including the territory of Brazil. It said the midpoint of the crash zone was located in the Brazilian state of Goias.

There have been no reports of injury or damage and so far there are no reported sightings or photographs of the event.

18:35 GMT – The latest Roscosmos prediction is that Phobos-Grunt will reenter between 12:50 and 1:34 EST over the Atlantic Ocean. “According to information from mission control of the space forces, the fragments of Phobos Grunt should have fallen into the Pacific Ocean at 1745 GMT,” space forces spokesman Alexei Zolotukhin told the Interfax news agency.

17:29 GMT – The latest Roscosmos prediction is that Phobos-Grunt will reenter between 12:50 and 1:34 EST over the Atlantic Ocean. This is their latest ground track, showing the predicted reentry point.

According to the center for orbital and debris reentry studies the satellite will re-enter 15 JAN 2012 @ 17:52 UTC ± 19 minutes. Re-entry path shows it will most likely land in the ocean somewhere between Brazil and Africa but some of the path is over land in those counties. 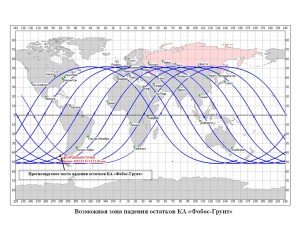 There is still a large uncertainty in the exact location of the reentry. The map above shows the current center point of the predicted window. “The European Space Agency’s current re-entry prediction for Phobos-Grunt … points to the early evening (Central European Time) on Sunday, Jan. 15, with an uncertainty of plus/minus five orbits,” equal to plus or minus 7.5 hours, Heiner Klinkrad, head of the space debris office at ESA’s European Space Operations Center in Darmstadt, Germany, told SPACE.com.

With this large a window it is really still a guessing game as to where the probe will impact.

According to the Federal Space Agency (Roscosmos).Pieces of the Fobos-Grunt mission will fall in the Pacific off Chile on January 15,

Roscosmos said that about 20-30 pieces of debris from the spacecraft weighing 200 kg would fall into the Atlantic Ocean. Earlier in the day.  Roscosmos originally said the spacecraft would plunge into the Indian Ocean. The agency revised its forecast due to Phobos Grunt’s lowered orbit, altered solar activity and changes in the atmosphere.

Russia’s space agency stated on Wednesday pinpointed the likely trajectory of Phobos-Grunt, predicting it would crash into the Indian Ocean west of Jakarta later this week.

“The predicted window for the fragments of the Phobos-Grunt to fall to Earth is between January 14 and 16, with the central point on January 15 at 1:18 pm Moscow time”, the Roskosmos agency said in a statement.

It also published a map showing the path of the probe, with its location west of Jakarta, apparently falling into the Indian Ocean.

They have also stated that this failure could be due to sabotage by America. Russian space agency director Vladimir Popovkin  said in an interview with a paper called Izvestia, “We don’t want to accuse anybody, but there are very powerful devices that can influence spacecraft now. The possibility they were used cannot be ruled out.” He also said, “the frequent failure of our space launches, which occur at a time when they are flying over the part of Earth not visible from Russia, where we do not see the spacecraft and do not receive telemetric information, are not clear to us.”

It could be that…or it could be that the Russian space program has made errors and is in trouble due to their own internal issues.

Still predicting a January 15th reentry of the Phobos Grunt Mars Probe the Russian Space agency said . The orientation of the spacecraft was capture in an amature video and appears to be flying with the solar arrays pointed away from the sun. This could explain why the probe has not contacted earth as it’s batteries are not being charged.

Ted Molczan of Toronto,  to studied a video of the spacecraft’s orientation.“The orientation revealed in Thierry Legault’s video propulsion module leading, solar arrays trailing  may possibly be explained by analogy with the shuttlecock used in the sport of badminton,” Molczan told SPACE.com.

Shuttlecocks are roughly conical, consisting of a heavy mass at the tip (called the cork) and trailing feathers forming the cone. This configuration results in highly stable flight through the air, with the heavy end leading, Molczan noted.

“Although Phobos-Grunt does not have feathers, it does have solar arrays, mounted on the end opposite the fuel tanks, which may produce a similar effect,” Molczan said. ”An essential requirement for shuttlecock flight is the presence of air, of which there is exceedingly little in space; however, at the very low altitude of Phobos-Grunt, the combination of atmospheric density and high orbital velocity is sufficient for aerodynamics to dominate the forces affecting the orientation of a spacecraft.”

The two objects that came off of Phobos-Grunt have re-entered already. No change to predicted re-entry data as yet. Parts that are expected to survive re-entry later this month:

1) Re-entry capsule (7.5 kg)  that was to return Phobos soil sample to  Earth
2) Russian officials admit about 20-30 other misalanous parts with a mass of about 200-300 kg will survive.
3) The Chinese spacecraft Yinghuo 1 that was part if this mission is an unknown.

Generally, about 10-40 percent of a satellite’s mass will survive reentry. The actual percentage for a specific object depends on the materials used in the object’s construction and on shape, size, and weight of the reentering object. With a mass of 13,500kg we can expect 1,350kg to 5,400kg to survive re-entry. A significant amount of the mass is fuel in aluminum tanks therefore the total that survives will most likely be on the lower end.

As a comparison the NASA UARS Spacecraft which re-entered earlier in 2011 weighed 11,500 kg. There was however no fuel left on board as the satellite was decommissioned in a controlled manner and all fuel was expended.

Predictions still are for reentry of Phobos Grunt around January 12th. As soon as a better predict of the data and amount of material that will impact earth are published we will post it here. Russians still claim there will be no harm to humans from probe impact.

Still waiting on official update but current re-entry forecasts have the re-entering Jan. 14 or 15, plus or minus five days, according to space expert Heiner Klinkrad, head of the space debris office at the European Space Agency’s space operations center in Darmstadt , Germany. Russian scientists are working to assess the re-entry survivability of Phobos-Grunt, a spacecraft that weighs nearly 14 tons.They assume that about 20 to 30 fragments will reach ground with an overall mass of less than 200 kilograms, or  400 pounds of leftover hardware.

No current change in the predicted reentry date yet but Russia had another failed launch attempt this week. A Meridian third stage failed and exploded, read about it here. As we get closer to the time the predictions will get better. Probe orbit continues to decay. The doomed Russian mars probe Phobos Grunt is due to re-enter around January 9, 2011. The exact location and time will be know no more than a few days prior. No more than 400 pounds of the debris of the Phobos-Grunt craft will reach the Earth’s surface, and the fuel is expected to totally burn up in the atmosphere, Roscosmos said on its Web site.

New video from ground as probe passes over head.

If you look closely you can see the luminosity change indicating the satellite is tumbling. As the various parts of the satellite reflect the sun differently the probe appears to change brightness. The satellite is know to have at least two small pieces fall off of it already, one has re-entered. The probe has also been see tumbling as it has flown overhead and photographed by amateur astronomers.

The Russian Space agency web site said “According to expert estimations, the time period of the spacecraft’s falling to Earth will cover the period from Jan. 6 to Jan. 19, 2012. … The location and the exact time will be unveiled no earlier than a few days prior,” the Web statement said Phobos-Grunt is currently moving around the Earth at an altitude that varies between 201km (perigee) and 275km (apogee).The maximum latitudes are 51 degrees North and South, encompassing London (UK) in the Northern Hemisphere and Punta Arenas (Chile) in the Southern Hemisphere.
The massive spacecraft, still loaded with 8 tons of rocket fuel, which will burn up during entry. About 20 to 30 pieces of debris, totaling several hundred pounds, are expected to survive atmospheric heating. Impacting the surface somewhere between 51.5 degrees to either side of the equator. In a statement, Roscosmos, the Russian federal space agency, said the spacecraft’s propellant — highly toxic nitrogen tetroxide and dimethylhydrazine rocket fuel — will burn up in the atmosphere and poses no threat to the public. There are no radioactive RTGs like those used in deep space probes to worry about. However the agency said that 10 micrograms of radioactive Cobalt-57, used in one of the spacecraft’s experiments, would not pose a health threat or have any adverse environmental threat.