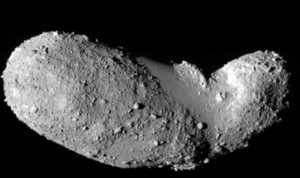 Source (JAXA) – HAYABUSA is a space science mission launched in 2003 by Japan Aerospace Exploration Agency JAXA. The challenge assigned to the mission was to explore an asteroid and to return samples from the asteroid back to the earth. HAYABUSA approached asteroid Itokawa in November 2005. After detailed remote-sensing observations had been performed, touch-and-go operations were attempted twice to collect samples from the surface of the asteroid. The re-entry capsule that carried the sample container was returned to the earth in June 2010.

Although the sampling mechanism did not work as had been planned, HAYABUSA managed to capture thousands of tiny particles (mostly 10-100 micrometers in size) from Itokawa’s surface and kept them safely in the container until they were curated at ISAS, JAXA. The HAYABUSA samples, unlike meteoritic samples, have neither been exposed to the earth air nor have experienced shock and high-temperatures during entry into the earth’s atmosphere. The HAYABUSA samples are pristine asteroid regolith materials that uniquely retain information of the surface environment of the asteroid.

Japan Aerospace Exploration Agency (JAXA) has been engaged in initial analysis  of Itokawa’s sample brought back by HAYABUSA. They offering the announcement of opportunity for HAYABUSA Sample Investigation to scientists who wish to examine these rare samples.