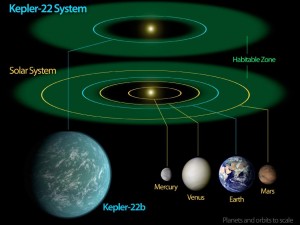 First planet in zone that could support life found

(Source – NASA): This diagram compares our own solar system to Kepler-22, a star system containing the first “habitable zone” planet discovered by NASA’s Kepler mission. The habitable zone is the sweet spot around a star where temperatures are right for water to exist in its liquid form. Liquid water is essential for life on Earth.

Kepler-22’s star is a bit smaller than our sun, so its habitable zone is slightly closer in. The diagram shows an artist’s rendering of the planet comfortably orbiting within the habitable zone, similar to where Earth circles the sun. Kepler-22b has a yearly orbit of 289 days. The planet is the smallest known to orbit in the middle of the habitable zone of a sun-like star. It’s about 2.4 times the size of Earth.

Previous research hinted at the existence of near-Earth-size planets in habitable zones, but clear confirmation proved elusive. Two other small planets orbiting stars smaller and cooler than our sun recently were confirmed on the very edges of the habitable zone, with orbits more closely resembling those of Venus and Mars.

“This is a major milestone on the road to finding Earth’s twin,” said Douglas Hudgins, Kepler program scientist at NASA Headquarters in Washington. “Kepler’s results continue to demonstrate the importance of NASA’s science missions, which aim to answer some of the biggest questions about our place in the universe.”

“Fortune smiled upon us with the detection of this planet,” said William Borucki, Kepler principal investigator at NASA Ames Research Center at Moffett Field, Calif., who led the team that discovered Kepler-22b. “The first transit was captured just three days after we declared the spacecraft operationally ready. We witnessed the defining third transit over the 2010 holiday season.”

Kepler-22b is located 600 light-years away. While the planet is larger than Earth, its orbit of 290 days around a sun-like star resembles that of our world. The planet’s host star belongs to the same class as our sun, called G-type, although it is slightly smaller and cooler.

There are 48 planet candidates in their star’s habitable zone. While this is a decrease from the 54 reported in February, the Kepler team has applied a stricter definition of what constitutes a habitable zone in the new catalog, to account for the warming effect of atmospheres, which would move the zone away from the star, out to longer orbital periods.

“The tremendous growth in the number of Earth-size candidates tells us that we’re honing in on the planets Kepler was designed to detect: those that are not only Earth-size, but also are potentially habitable,” said Natalie Batalha, Kepler deputy science team lead at San Jose State University in San Jose, Calif. “The more data we collect, the keener our eye for finding the smallest planets out at longer orbital periods.”

3 thoughts on “Kepler finds planet within the Habitable Zone!”