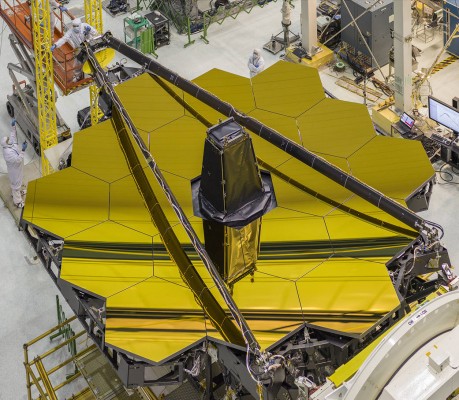 If you live in the DC-Baltimore area do yourself a favor and go see the fully assembled mirror there. I went to see it a few weeks ago and it is a marvel to behold. To think of all the discoveries it will make and it is only a few feet away from you on the other side of the glass…wow. The clean room has a viewing area that allows people to look in and see what is going on. Most of the time the covers are on but even then it is awesome. To get an idea of the size of the mirror look at the technician at the top of the boom.The  James Webb Space Telescope above  is viewed from overhead with its secondary mirror booms stowed. This is the position the secondary mirror will be in during launch. In the next few months, engineers will install other key elements, and take additional measurements to ensure the telescope is ready for space.

The telescope’s mirrors are covered in a microscopically thin layer of gold, which optimizes them for reflecting infrared light, which is the primary wavelength of light this telescope will observe. To ensure the mirror is both strong and light, the team made the mirrors out of beryllium. Each mirror segment is about the size of a coffee table and weighs approximately 20 kilograms (46 pounds). A very fine film of vaporized gold coats each segment to improve the mirror’s reflection of infrared light. The fully assembled mirror is larger than any rocket, so the two sides of it fold up. Behind each mirror are several motors so that the team can focus the telescope out in space.

The James Webb Space Telescope is the scientific successor to NASA’s Hubble Space Telescope. It will be the most powerful space telescope ever built. Webb will study many phases in the history of our universe, including the formation of solar systems capable of supporting life on planets similar to Earth, as well as the evolution of our own solar system. It’s targeted to launch from French Guiana aboard an Ariane 5 rocket in 2018. Webb is an international project led by NASA with its partners, ESA (European Space Agency) and the Canadian Space Agency.