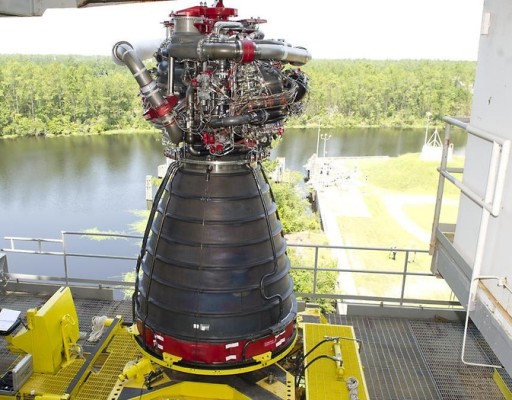 RS-25 rocket engine No. 0525 is positioned onto the A-1 Test Stand at NASA’s Stennis Space Center in Mississippi in preparation for a series of developmental tests.
Image Credit: NASA

(NASA) – Engineers have taken a crucial step in preparing to test parts of NASA’s Space Launch System (SLS) rocket that will send humans to new destinations in the solar system. They installed on Thursday an RS-25 engine on the A-1 Test Stand at the agency’s Stennis Space Center near Bay St. Louis, Mississippi.

The Stennis team will perform developmental and flight certification testing of the RS-25 engine, a modified version of the space shuttle main engine that powered missions into space from 1981 to 2011.  The SLS’s core stage will be powered by a configuration of four RS-25 engines, like the one recently installed on the A-1 stand.

“This test series is a major milestone because it will be our first opportunity to operate the engine with a new controller and to test propellant inlet conditions for SLS that are different than the space shuttle,” said Steve Wofford, SLS Liquid Engines Element manager. “This testing will confirm the RS-25 will be successful at powering SLS.”

Early tests on the engine will collect data on the performance of its new advanced engine controller and other modifications. The controller regulates valves that direct the flow of propellant to the engine, which determines the amount of thrust generated during an engine test, known as a hotfire test. In flight, propellant flow and engine thrust determine the speed and trajectory of a spacecraft. The controller also regulates the engine startup sequence, which is especially important on an engine as sophisticated as the RS-25. Likewise, the controller determines the engine shutdown sequence, ensuring it will proceed properly under both normal and emergency conditions.

The SLS is designed to carry astronauts in NASA’s Orion spacecraft deeper into space than ever before, to destinations including an asteroid and Mars. NASA is using existing and in-development hardware and infrastructure, including the RS-25 engine, to the maximum extent possible to enable NASA to begin deep space missions sooner.

Testing of engine No. 0525 begins in the coming weeks on a test stand originally built in the 1960s for Apollo-era engines that helped launch the lunar missions. The stand has since been used for several major testing projects, and NASA spent almost a year modifying the structure to accommodate the RS-25 engine.

The SLS Program is managed at NASA’s Marshall Space Flight Center in Huntsville, Alabama. Aerojet Rocketdyne of Sacramento, California, is on contract with NASA to adapt the RS-25 engines for SLS missions.

2 thoughts on “SLS takes another step towards flight readiness”