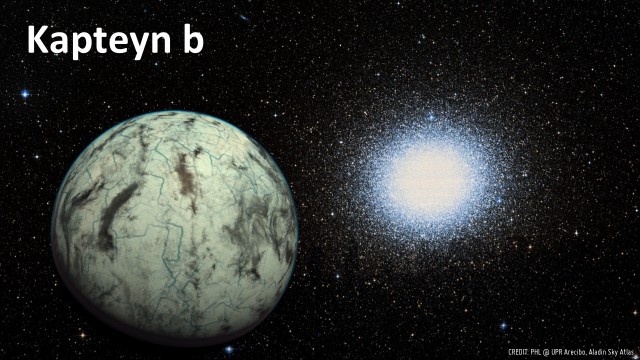 Artistic representation of the potentially habitable world Kapteyn b with the globular cluster Omega Centauri in the background. It is believed that the Omega Centauri is the remaining core of a dwarf galaxy that merged with our own galaxy billions of years ago bringing Kapteyn’s star along. Credit: PHL @ UPR Arecibo, Aladin Sky Atlas.

(PHL @ UPR Arecibo) – An international team of astronomers, led by Guillem Anglada-Escude from Queen Mary University, reports two new planets orbiting a very old and nearby star to the Sun named Kapteyn’s star. One of the newly-discovered planets, Kapteyn b, is potentially habitable as it has the right-size and orbit to support liquid water on its surface. What makes this discovery highly interesting is the peculiar story and age of the star. Kapteyn b is likely over twice the age of Earth and the oldest known potentially habitable planet listed in the Habitable Exoplanets Catalog.

The Super-Earth Kapteyn b orbits the star every 48 days and has a mass at least five times that of Earth’s. The second planet, Kapteyn c, is a more massive Super-Earth with an orbit of 121 days and too cold to support liquid water. At the moment, only a few properties of the planets are known: minimum masses, orbital periods, and distances to the star. By measuring their atmospheres with future instruments, scientists will try to find out whether some of these planets are truly habitable worlds.
Kapteyn b is probably colder than Earth given a similar atmosphere. However a denser atmosphere could easily provide for equal or even higher temperatures. Based on its stellar flux (45% that of Earth’s) and mass (≥ 4.8 Earth masses) the Earth Similarity Index (ESI) of Kapteyn b is comparable to Kepler-62f and Kepler-186f. Given its old age (~11.5 billion years), Kapteyn b has had plenty of time to develop life, as we know it.
The astronomers used new data from HARPS spectrometer at the ESO’s La Silla observatory in Chile to measure tiny periodic changes in the motion of the star. Using the Doppler Effect, which shifts the star’s light spectrum depending on its velocity, the scientists worked out some properties of these planets, such as their masses and orbital periods.The study also combined data from two more high-precision spectrometers to secure the detection: HIRES at Keck Observatory and PFS at Magellan/Las Campanas Observatory.
About Kapteyn’s Star
Discovered at the end of the 19th century and named after the Dutch astronomer who found it (Jacobus Kapteyn), Kapteyn’s is the second fastest moving star in the sky and belongs to the galactic halo, an extended cloud of stars orbiting our Galaxy in very elliptic orbits. With a third of the mass of the Sun, this red-dwarf can be seen in the southern constellation of Pictor with an amateur telescope.
Typical planetary systems detected by NASA’s Kepler mission are hundreds of light-years away. In contrast, Kapteyn’s star is the 25th nearest star to the Sun and it is only 13 light years away from Earth. It was born in a dwarf Galaxy absorbed and disrupted by the Early Milky Way. Such a galactic disruption event put the star in its fast halo orbit. The likely remnant core of the original dwarf galaxy is Omega Centauri, an enigmatic globular cluster 16,000 light years from Earth which contains hundreds of thousands of similarly old suns. This sets the most likely age of its planets at 11.5 billion years; which is 2.5 times older than Earth and ‘only’ 2 billion years younger than the Universe itself (~13.7 billion years). 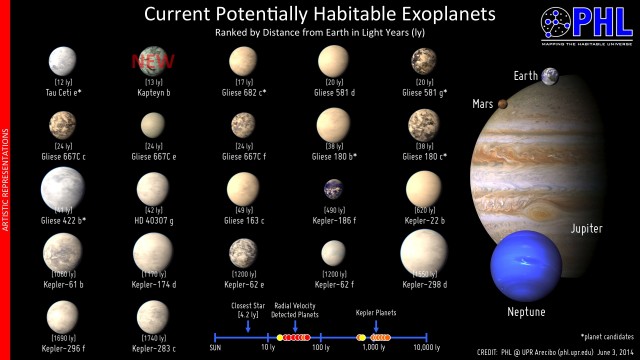 The Habitable Exoplanets Catalog now has 22 objects of interest including Kapteyn b, the oldest and second closest to Earth potentially habitable exoplanet.