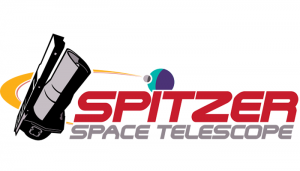 (Source NASA) – Ten years after a Delta II rocket launched NASA’s Spitzer Space Telescope, lighting up the night sky over Cape Canaveral, Fla., the fourth of four Great Observatories continues to illuminate the dark side of the cosmos with its infrared eyes.

The telescope studied comets and asteroids, counted stars, scrutinized planets and galaxies, and discovered soccer-ball shaped carbon spheres in space called buckyballs. Moving into its second decade of scientific scouting from an Earth-trailing orbit, Spitzer continues to explore the cosmos near and far. One additional task is helping NASA observe potential candidates for a developing mission to capture, redirect and explore a near-Earth asteroid.

Spitzer image of a galaxy, called NGC 1097, is located 50 million light-years away. It is spiral-shaped like our Milky Way, with long, spindly arms of stars. The “eye” at the center of the galaxy is actually a monstrous black hole surrounded by a ring of stars. In this color-coded infrared view from Spitzer, the area around the invisible black hole is blue and the ring of stars, white.
Image credit: NASA/JPL-Caltech

“President Obama’s goal of visiting an asteroid by 2025 combines NASA’s diverse talents in a unified endeavor,” said John Grunsfeld, NASA’s associate administrator for science in Washington. “Using Spitzer to help us characterize asteroids and potential targets for an asteroid mission advances both science and exploration.”

Spitzer’s infrared vision lets it see the far, cold and dusty side of the universe. Close to home, the telescope has studied the comet dubbed Tempel 1, which was hit by NASA’s Deep Impact mission in 2005. Spitzer showed the composition of Tempel 1 resembled that of solar systems beyond our own. Spitzer also surprised the world by discovering the largest of Saturn’s many rings. The enormous ring, a wispy band of ice and dust particles, is very faint in visible light, but Spitzer’s infrared detectors were able to pick up the glow from its heat.

Perhaps Spitzer’s most astonishing finds came from beyond our solar system. The telescope was the first to detect light coming from a planet outside our solar system, a feat not in the mission’s original design. With Spitzer’s ongoing studies of these exotic worlds, astronomers have been able to probe their composition, dynamics and more, revolutionizing the study of exoplanet atmospheres.

Other discoveries and accomplishments of the mission include a complete census of forming stars in nearby clouds; a new and improved map of the Milky Way’s spiral-arm structure; and, with NASA’s Hubble Space Telescope, discovering that the most distant galaxies known are more massive and mature than expected.

“I always knew Spitzer would work, but I had no idea that it would be as productive, exciting and long-lived as it has been,” said Spitzer project scientist Michael Werner of NASA’s Jet Propulsion Laboratory, who helped conceive the mission. “The spectacular images that it continues to return, and its cutting-edge science, go far beyond anything we could have imagined when we started on this journey more than 30 years ago.”

In October, Spitzer will attempt infrared observations of a small near-Earth asteroid named 2009 DB to better determine its size, a study that will assist NASA in understanding potential candidates for the agency’s asteroid capture and redirection mission. This asteroid is one of many candidates the agency is evaluating.

Spitzer, originally called the Space Infrared Telescope Facility, was renamed after its launch in honor of the late astronomer Lyman Spitzer. Considered the father of space telescopes, Lyman Spitzer began campaigning to put telescopes in space, away from the blurring effects of the Earth’s atmosphere, as early as the 1940s. His efforts also led to the development and deployment of NASA’s Hubble Space Telescope, carried to orbit by the space shuttle in 1990.

In anticipation of the Hubble launch, NASA set up the Great Observatories program to fly a total of four space telescopes designed to cover a range of wavelengths: Hubble, Spitzer, the Chandra X-ray Observatory and the now-defunct Compton Gamma Ray Observatory.

“The majority of our Great Observatory fleet is still up in space, each with its unique perspective on the cosmos,” said Paul Hertz, Astrophysics Division director at NASA headquarters in Washington. “The wisdom of having space telescopes that cover all wavelengths of light has been borne out by the spectacular discoveries made by astronomers around the world using Spitzer and the other Great Observatories.”

Spitzer ran out of the coolant needed to chill its longer-wavelength instruments in 2009, entering the so-called warm mission phase. Now, after its tenth year of peeling back the hidden layers of the cosmos, its journey continues.

“I get very excited about the serendipitous discoveries in areas we never anticipated,” said Dave Gallagher, Spitzer’s project manager at JPL from 1999 to 2004, reminding him of a favorite quote from Marcel Proust: “The real voyage of discovery consists not in seeking new landscapes, but in having new eyes.”