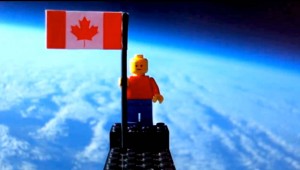 Some cool space related things have been done with LEGOs in the past including the LEGO man in space. Now NASA and LEGO are getting together to sponsoring a contest to build a model satellite out of LEGOs. Of course this one will not be going into space but it is still a fun contest.

Big Kids 16 years old and older are invited to journey into space by creating one a model of one of NASA’s future missions with LEGO bricks. Builders can be imaginative as they wish, although their entry should reflect one of the missions NASA of the future. These missions are not planned until the 2030s so there should be no issue using ones imagination.

All entries must be bookmarked to ReBrick in the “Building Challenge” category. The winners will be chosen by a committee of judges. This contest begins June 5th 2013 and is open through July 31st, 2013.   Official judging will begin on August 5th 2013

The grand prize includes 21101 LEGO CUUSOO Hayabusa set, signed by the LEGO designer Melody Louise Caddick, recognition and honorable mention on NASA.gov, and a collection of NASA memorabilia including a personalized signed lithograph of the astronaut from the judges committee. There will also be two runner-ups, see official rules for those prizes.