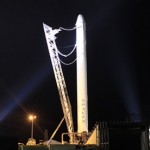 Yesterdays launch of the Falcon 9 rocket at first appeared picture perfect but you an clearly see what looks like an explosion and debris falling from the rocket just as it reaches max Q or maximum aerodynamic pressure one minute and nineteen seconds after launch. The Falcon is designed with a total of 9 engines on the first stage, on board computers can adjust for the loss of a single engine.

At about 1:31 into this video of the launch the explosion can be seen.

SpaceX claims the engine did not explode as they still were getting telemetry from it. Be your own judge by watching the video. Telemetry or not there was some serious failure of the number one engine.