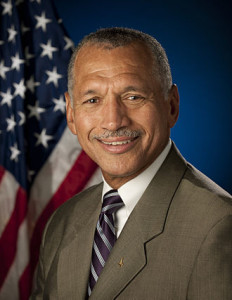 Last week NASA Administrator Charles Bolden spoke to the Space Business Round table in his first public speech this year. In this speech he stated that since the 1980s, as long as he has been at NASA, we have “continuously been at a point 20 years from a man on Mars”. Every year that passed the window slid and we were still twenty years away. He went on he now believes were in the window where we are actually twenty years from a man on Mars, and he expects to watch it with his great-grandchildren. “The president will announce his 2016 budget for NASA in February, and we’re expecting a vote of confidence in this direction, and the resources to continue our journey to Mars,” Bolden said.

We have made strides in the path to Mars with the Orion crew vehicle and the Space Launch System, but twenty years may be hopeful and somewhat less than realistic. If we are to make a trip to mars by 2035 we need to have the complete SLS system which is currently slated to be ready in 2030. That leaves just a five year window to execute the trip to Mars. If there is any slip in the SLS schedule then 2035 will not happen. Based on previous history a program as big as the SLS has a large probability of not meeting schedule.

Lets hope the problems are overcome and his dream becomes reality but when we take a sober look at it a trip to Mars in this time frame is less than probable. The silver lining here is that the pieces are indeed being put together. A launch capability, the vehicle to get there, and the technology to survive on Mars are all in the works and more than just an academic paper exercise. We now have actual flight hardware which is now flight proven with the recent Orion launch and more testing in  the future with a manned launch in 2021.

Related: When will USA return man to the moon? Will you see it?

It may seem were moving at a snail’s pace and making painfully slow progress but with limited budgets and the scale of the task we should be happy were making the progress we are. Maybe it is a bit optimistic to think were finally in the 20 years to Mars window, but we may not be that far away (by a factor of about two).