Russia threatens to stop ISS launches, what is next for Astronauts? IIS? 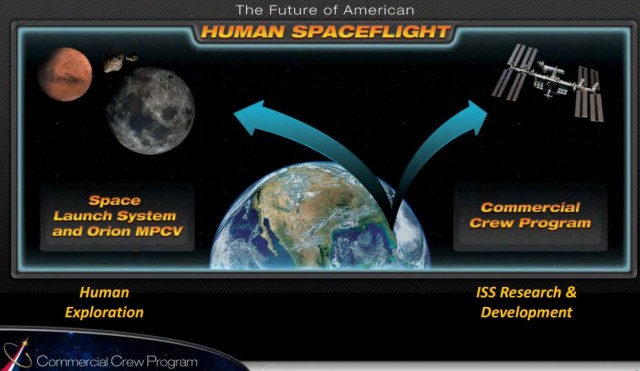 With the recent threat from the Deputy Prime Minister of Russia to renege on the commitment to send U.S. Astronauts to the International Space Station, what will the NASA do? To be specific the Deputy Prime Minister Dmitry Rogozin has stated “After analyzing the sanctions against our space industry, I suggest to the USA to bring their astronauts to the International Space Station using a trampoline.”. While this is not an official statement it is rather ominous considering the dependence the U.S. has on Russia since the Space Shuttle program was ended. Since the end of that program NASA has not been able to send Astronauts into space. There was also a period after that when they could not send cargo either…not a good place to be. How the U.S. got into this predicament is another article, what are the Astronauts to do now?

Well the good news is the crew on board the ISS right now is in no danger. There is always a crew return vehicle attached to the ISS so the crew can return any time. We do not need to launch a vehicle to return them safely to Earth. The other good news is that NASA can now send supplies up to the station. They have new rockets which are launched from Wallops Island as well as Kennedy Space Center. From Wallops Orbital Science has recently started sending Antares rockets to the space station. On 1/9/14 Orbital Sciences Corporation’s Antares rocket launched from Pad 0A at the Wallops Flight Facility, Va. to send the company’s Cygnus ship on a it’s first supply mission to the International Space Station. In addition SpaceX is also sending it’s Dragon capsule to the space station using their Falcon 9 Rocket..

That is to good news. The bad news is none of those rockets or capsules are ready to take men into space. The next rocket and crew return vehicle which will be capable of taking men into space is the Orion capsule coupled with the SLS rocket. Orion’s first flight test, called Exploration Flight Test-1, will launch this year atop a Delta IV Heavy rocket from Cape Canaveral Air Force Station’s Space Launch Complex 37. This test will evaluate launch and high speed re-entry systems such as avionics, attitude control, parachutes and the heat shield.

The first SLS launch is in 2017. This will carry an unmanned Orion into orbit to demonstrated the integrated performance of the systems. The second launch is scheduled for 2021 and will carry 4 astronauts. So what can the U.S. do between now and 2021? SpaceX has already launched their Dragon crew capsule to the ISS.  On 25 May 2012, an un-crewed variant of Dragon became the first commercial spacecraft to successfully rendezvous with and attach to the International Space Station (ISS).  SpaceX said Wednesday that the company hoped to launch U.S. astronauts into orbit as early as 2015 — aboard  would be SpaceX employees and not NASA personnel. This would be an “orbital-demonstration flight” that would stay in space at least three days. It would not dock with the space station. SpaceX is part of NASA’s Commercial Crew Program. This program was put in place to allow NASA to have both it’s own SLS program as well as various other commercial companies support manned missions. The current notional schedule shows the first commercial manned mission to IIS in 2017. The idea is good, but the execution is perhaps just a bit late.

If Russia holds to it’s threat, no longer support the U.S. this will place a huge amount of pressure on NASA to start using companies like SpaceX sooner rather than later. Using these flight proven (but not yet manned) systems, Falcon 9 and Dragon capsule they could fill the void. Having no way for the United States to place a man in space is a most unfortunate predicament. We very well could see no U.S. astronauts sent into space for the next several years while this is all worked out. Hopefully the political pressure eases and we can return to “normal” where Russia will again accept U.S. astronauts. In my opinion we should never allowed ourselves to become so dependent on them, or any one else, and should accelerate plans to get the commercial capability on place.

One thought on “Russia threatens to stop ISS launches, what is next for Astronauts? IIS?”