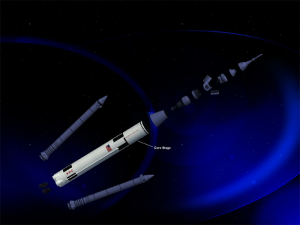 When the entire program is complete in 2030 the Space Launch System will have cost the American taxpayers 41 billion dollars. (Or about 2.5 years of full NASA budgets). Ignoring whether that is the wisest use of the money with commercially available rockets like the Falcon coming on line, progress continues to be made on SLS. NASA’s administrator visited Marshall Space Flight Center where testing is underway on the avionics unit for the largest, most powerful rocket ever built since the Saturn V.

At Marshall’s System Integration Laboratory, Bolden, along with staff from Alabama’s congressional delegation and community leaders, had the opportunity to view the Space Launch System (SLS) avionics unit arranged in flight configuration, along with booster hardware, which are being integrated and tested together to ultimately guide the entire vehicle. He also watched flight software simulations of how SLS will perform during launch.

Related: What is the future of Spaceflight? SLS, SpaceX, Virgin Galactic?

“It’s great to be back at Marshall and see, firsthand, the impressive progress made by the SLS team,” said Bolden. “SLS will help take American astronauts an asteroid and Mars, and it all starts here in Huntsville. My hat’s off to the entire team for their hard work.”

The completed rocket will stand 321 feet tall and include the core stage, which stores the cryogenic liquid hydrogen and liquid oxygen that will fuel the vehicle’s four RS-25 engines and, with two five-segment solid rocket boosters, power the rocket.

The avionics unit — including its hardware, software and operating systems — will guide the rocket to deep space destinations, including an asteroid and Mars. The flight computers will be housed in the SLS core stage, while other avionics are distributed throughout the vehicle.

“This is a significant and exciting milestone for both NASA and Boeing,” said Lisa Blue, stages avionics system manager in the SLS Program Office. “We are using and testing technologies that include the most powerful computer processor ever used in a flight system.”

In 2015, the avionics unit will be shipped to NASA’s Michoud Assembly Facility in New Orleans, where the core stage is being manufactured, and attached to the actual rocket.

For its first flight test in 2017, the SLS will be configured to lift 70 metric tons (77 tons), and carry an uncrewed Orion spacecraft beyond low-Earth orbit. In its final stage of evolution, the SLS will provide an unprecedented lift capability of 130 metric tons (143 tons) to enable missions even farther into our solar system.