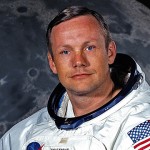 Today Neil Armstrong, first man to walk on the Moon passed. He died from complications related to heart surgery at age 82. “While we mourn the loss of a very good man, we also celebrate his remarkable life and hope that it serves as an example to young people around the world to work hard to make their dreams come true, to be willing to explore and push the limits, and to selflessly serve a cause greater than themselves,” his family said

Neil Armstrong represents what some would argue was the pinnacle of technological achievement by NASA and the American public that put him there. I do not think there is a person alive who would not remember where they were when they first heard we had landed safely on the moon. I still remember it myself. Sitting in my parent’s house at the ripe old age of 7 in front of our 25 inch color TV. (At the time that was considered huge.) Thinking about how ultimately alone those men were traveling and then landing on the moon. No hope of anyone coming to their rescue if anything went wrong, totally reliant on the technology that was keeping them alive, almost magically transporting them to the moon. The word hero does not even begin to describe the brave men on that trip. Waiting in anticipation as they landed and then exited the Lunar Lander, commentary by Walter Cronkite as he announced mans first steps on the moon. It was something never to be forgotten

Most of us did not know Neil but we were there in spirit that day in 1969 on the moon with him. We listened as he uttered the now famous words “That’s one small step for man, one giant leap for mankind.” That day he marked a milestone in history, in our lives. Never truly seeming comfortable with the limelight he was a modest man and seemed to poses qualities we all wish we had. It has been over forty years since he first set foot on the moon. The living memory of being there is slowly ebbing away as these hero’s from our past leave us. Neil Armstrong being the most memorable and perhaps most symbolic one. As he stood there on the Moon surely he could hot have imaged we it would be over half a century without returning to the moon, but here we are

Neil Armstrong, American, Hero, Patriot, Leader, Thank you for what you did for all of us. You will be missed.

FAMILY STATEMENT REGARDING THE DEATH OF NEIL ARMSTRONG

“We are heartbroken to share the news that Neil Armstrong has passed away following complications resulting from cardiovascular procedures.

Neil was our loving husband, father, grandfather, brother and friend.

Neil Armstrong was also a reluctant American hero who always believed he was just doing his job. He served his Nation proudly, as a navy fighter pilot, test pilot, and astronaut. He also found success back home in his native Ohio in business and academia, and became a community leader in Cincinnati.

He remained an advocate of aviation and exploration throughout his life and never lost his boyhood wonder of these pursuits.

As much as Neil cherished his privacy, he always appreciated the expressions of good will from people around the world and from all walks of life.

While we mourn the loss of a very good man, we also celebrate his remarkable life and hope that it serves as an example to young people around the world to work hard to make their dreams come true, to be willing to explore and push the limits, and to selflessly serve a cause greater than themselves.

For those who may ask what they can do to honor Neil, we have a simple request. Honor his example of service, accomplishment and modesty, and the next time you walk outside on a clear night and see the moon smiling down at you, think of Neil Armstrong and give him a wink.”