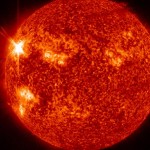 Analysis of Solar Active Regions and Activity from  07/2100Z
to 08/2100Z show  Solar activity was high. Region AR1515 produced
an M6/1n at 08/1632Z .  An associated CME became
visible in LASCO C2 imagery at 08/1648Z. The majority of the ejecta
appears to be directed southwest but further analysis will be
conducted as imagery becomes available. As new region 1520
continued to grow with a beta-gamma magnetic configuration. The region produced
an M1/Sf at 08/0953Z. NOAA forecasters estimate an 80% chance of M-flares during the next 24 hours.

NOAA forecasters estimate an 80% chance of M-flares and a 25% chance of X-flares during the next 24 hours. Sunspot AR1515 has been very active and we will likely see more activity from it. In addition there is a new sunspot that is just coming into view that is also very large and could cause even more activity.

Sunspot AR1515 continues to be active with at least 4 CMEs thus far, one of them is headed for earth. One XRay Event exceded an M5:

The Minor CME cloud will reach Earth on July 7th around 0600 UT. Click on the video below to view the CME path. This should make for good auroras when it passes. 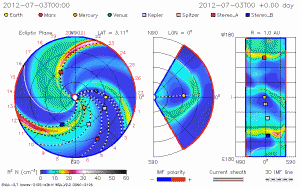 As sunspot AR1515 develops ‘beta-gamma-delta’ magnetic field energy for the most powerful explosions becomes available. The sunspot’s magnetic field is active with flares the strongest so far being an M5-flare at 09:54 UT. A single flare contains more energy than a billion atomic bombs.

The sunspot is  more than 100,000 km  from end to end. As the sunspot is now turning towards Earth any energy released by it will be directed towards Earth which could indeed make for an interesting 4th of July.  It has already caused some radio blackouts and there could be sudden ionospheric disturbances, and geomagnetic storms.

July 2nd at 10:52 UT Sunspot AR1515 erupted and produced an M5.6-class solar flare that almost crossed the threshold into X-territory. . NOAA  estimates a 70% chance of M-class solar flares and a 10% chance of X-flares during the next 24 hours. The most recent alert was 2012 Jul 03 2048 UTC, Estimated Velocity: 874 km/s
Description: Type II emissions occur in association with eruptions on the sun and typically indicate a coronal mass ejection is associated with a flare event.

UV radiation from the flare lit up Earth’s upper atmosphere, producing waves of ionization over Europe. Space weather for the next 24 hours is predicted to be minor.
Radio blackouts reaching the R1 level are expected.

The CME is not expected to hit Earth but may give us a glancing blow on July 4th or 5th.