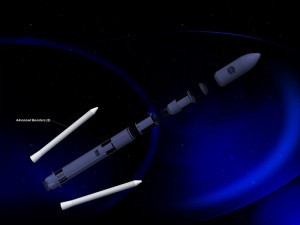 All programs undergo certain milestones as they progress. One of the earliest is the Preliminary Design Review or PDR. This review process includes meticulous, detailed analyses of the entire launch vehicle. Representatives from NASA, its contractor partners and experts from across the aerospace industry validate elements of the rocket to ensure they can be safely and successfully integrated. The SLS system was started when NASA’s ARES rocket program was canceled.

“This phase of development allows us to take a critical look at every design element to ensure it’s capable of carrying humans to places we’ve never been before,” said Dan Dumbacher, NASA’s deputy associate administrator for exploration systems development in Washington. “This is the rocket that will send humans to an asteroid and Mars, so we want to be sure we get its development right.”

The there are two versions of the SLS, one to used to carry astronauts into space, The other is the heavy lift version which will be complete in 2030. They use common components and reuse parts of the Space Shuttle including the Rocket Engines.

“The preliminary design review is incredibly important, as it demonstrates the SLS design meets all system requirements within acceptable risk constraints, giving us the green light for proceeding with the detailed design,” said Todd May, manager of the SLS Program at NASA’s Marshall Space Flight Center in Huntsville, Ala. “We are on track and meeting all the milestones necessary to fly in 2017.”

The SLS is targeted for a test launch with no crew aboard in 2017, followed by a mission with astronauts to study an asteroid by as early as 2021. NASA is developing the SLS and its new Orion spacecraft to provide an entirely new capability for human exploration. It will be flexible for launching spacecraft for crew and cargo missions, expand human presence beyond low-Earth orbit and enable new missions of exploration in the solar system.