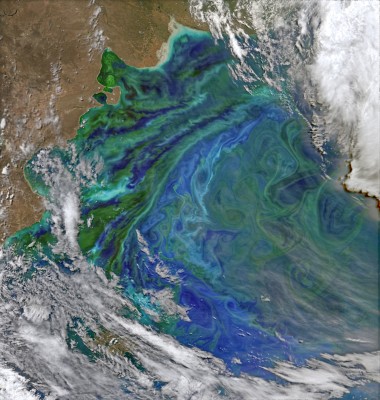 (NASA) – Late spring and summer weather brings blooms of color to the Atlantic Ocean off of South America, at least from a satellite view. The Patagonian Shelf Break is a biologically rich patch of ocean where airborne dust from the land, iron-rich currents from the south, and upwelling currents from the depths provide a bounty of nutrients for the grass of the sea—phytoplankton. In turn, those floating sunlight harvesters become food for some of the richest fisheries in the world.

The Visible Infrared Imaging Radiometer Suite (VIIRS) on Suomi NPP captured this view of phytoplankton-rich waters off of Argentina on December 2, 2014. Scientists in NASA’s Ocean Color Group used three wavelengths (671, 551, and 443 nanometers) of visible and near-infrared light to highlight different plankton communities in the water. Bands of color not only reveal the location of plankton, but also the dynamic eddies and currents that carry them.

The aquamarine stripes and swirls are likely coccolithophores, a type of phytoplankton with microscopic calcite shells that can give water a chalky color. The various shades of green are probably a mix of diatoms, dinoflagellates, and other species. Previous ship-based studies of the region have shown that Emiliania huxleyi coccolithophores and Prorocentrum sp.dinoflagellates tend to dominate. Scientists are working to identify types of phytoplankton from satellites images; hyperspectral imagers planned for future satellite missions should make that easier.

Blooms occur off of Patagonia because warmer, saltier waters from the subtropics meet the colder, fresher waters flowing up from the south. These currents collide along what oceanographers call a shelf-break front, a turbulent area of vertical and horizontal mixing on the edge of the continental shelf. The eddies and swirls in this region mix the waters and pull nutrients up from the deep ocean.

The Patagonian Shelf Break lies on the northern edge of a region that some scientists refer to as the “great southern coccolithophore belt” or the “great calcite belt.” From November to March of each year, satellite instruments detect an abundance of particulate inorganic carbon in far southern waters. That carbon signal often comes from the calcium carbonate of coccolithophores.