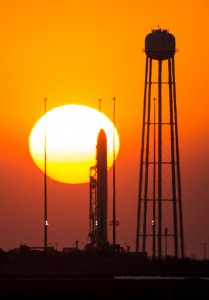 UPDATE – Launch was scrubbed due to a boat down range . The new launch time is now Tuesday night at 6:22 p.m.

Managers for Orbital Sciences Corp. of Dulles, Virginia, and NASA gave a “go” to proceed toward the Monday, Oct. 27, launch of the Orbital CRS-3 cargo resupply mission to the International Space Station. The launch is scheduled for 6:45 p.m. EDT launch from the Mid-Atlantic Regional Spaceport Pad 0A at NASA’s Wallops Flight Facility in Virginia. NASA Television coverage of the launch will begin at 5:45 p.m.

There is a 98 percent chance of favorable weather at the time of launch.

NASA TV will broadcast two news briefings today from the Wallops Visitors Center. A prelaunch status briefing will be held at 1 p.m. followed by a preview of the mission’s science cargo at 2 p.m. The briefings will be carried live on NASA TV.

NASA will take questions from social media users in advance of and during the briefing using the hashtag #AskNASA. To learn more about all the ways to connect and collaborate with NASA, visit: http://www.nasa.gov/connect. 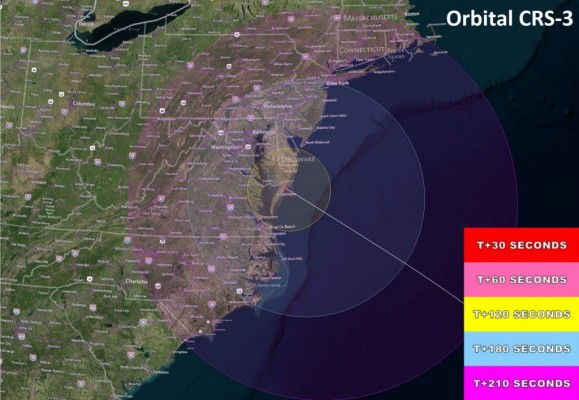 The Antares launch scheduled Oct. 27 will be visible to residents in the mid-Atlantic, weather permitting. Credit: NASA/Wallops Mission Planning Lab

The map above shows the areas that will be able to see this launch. Now that Fall is upon us it is dark much earlier and this is a real aid in viewing of launches from Wallops. Knowledgeorb reports have see the flame trail clearly visible from as far away as Lancaster Pa. and people in the Baltimore and Washington D.C. will have an excellent view.