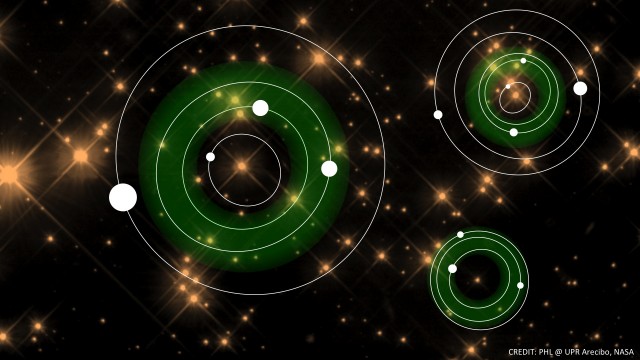 Four new nearby potentially habitable planet candidates, two of them in the same star system.

An international team of astronomers led by Mikko Tuomi from the University of Hertfordshire announced the discovery of four nearby potentially habitable super-Earth worlds among eight new planet candidates. They orbit the habitable zone of the nearby stars, Gliese 180, 422, and 682. 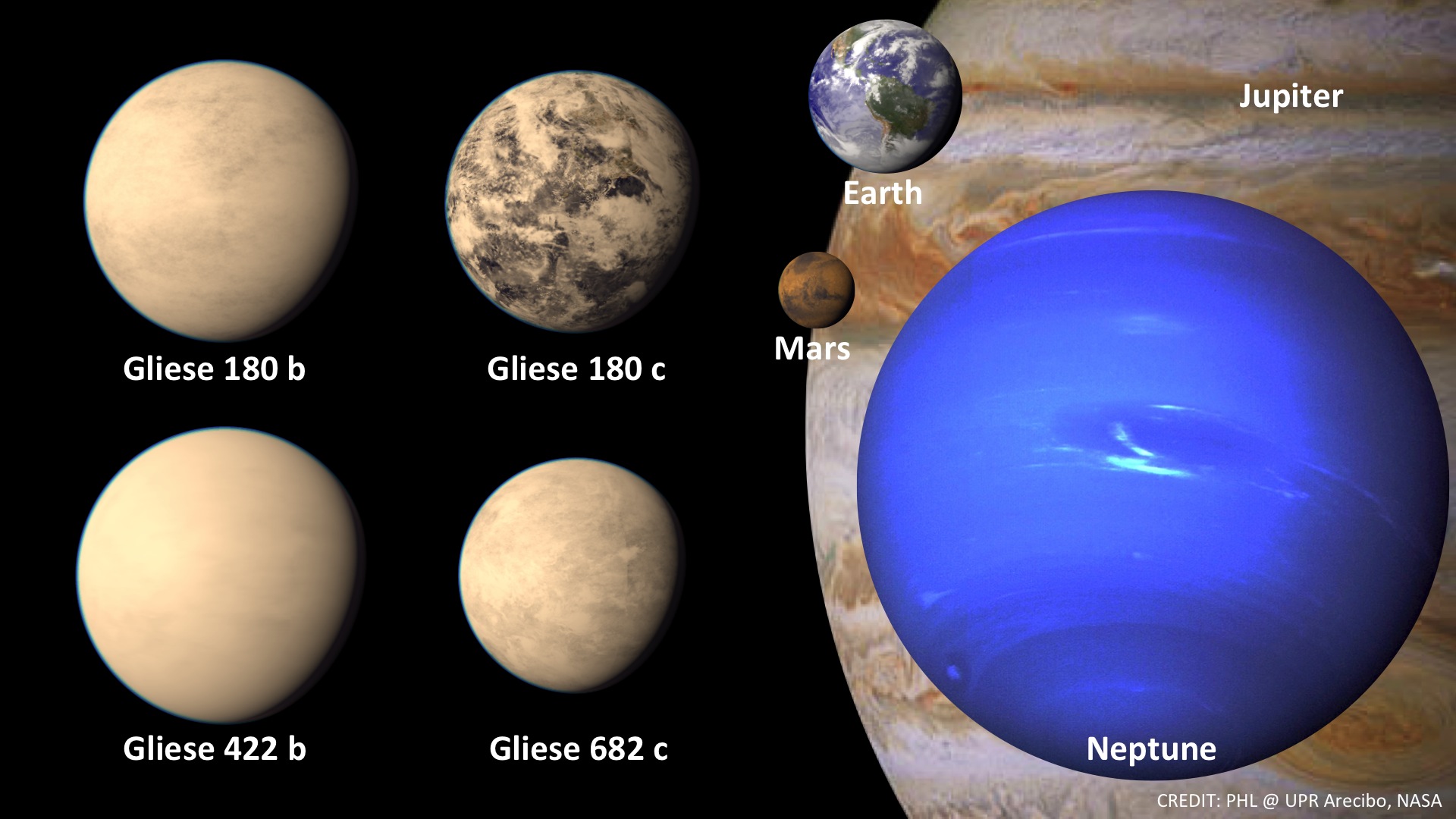 Figure 1. Artistic representation of the habitable zone super-Earth planets Gliese 180 b and c, and Gliese 422 b and Gliese 682 b. They are represented here as worlds with thick cloud covers that look pinkish due to the reddish light of the red dwarf stars they orbit. Only their minimum masses are known but they are shown with sizes corresponding to rocky worlds, just like Earth. They could be twice as big, almost like Neptune, if they are instead non-habitable gas worlds. Earth, Mars, Neptune, and Jupiter are shown for size comparison. Credit: PHL @ UPR Arecibo, NASA.

Figure 2. These images show the star fields around the new three stellar systems with four potentially habitable planet candidates discovered by astronomers led by Mikko Tuomi from the University of Hertfordshire. The field of view is about the size of the Full Moon. A small telescope is necessary to see these since they are dim red dwarf stars. Credit: PHL @ UPR Arecibo, CDS/Aladin.

Figure 3. The individual orbits of the four new potentially habitable planets discovered by astronomers led by Mikko Tuomi from the University of Hertfordshire. Two are around the star Gliese 180, and the other two around Gliese 422 and Gliese 682. Note that each frame shows only the orbit of one planet at a time for simplicity. Click the frames to enlarge. Credit: PHL @ UPR Arecibo. 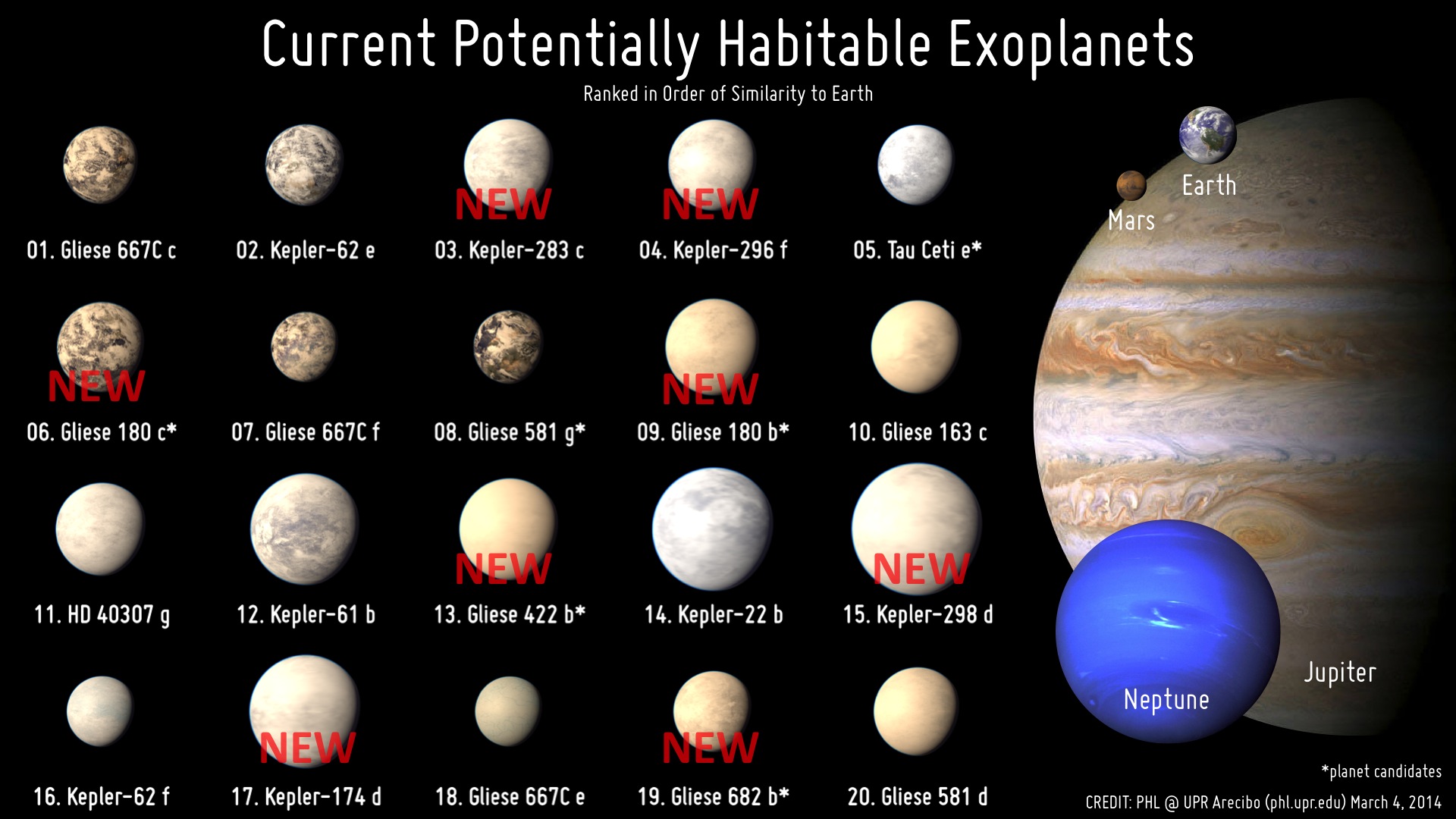 Figure 4. The new lineup of twenty potentially habitable exoplanets according to the Habitable Exoplanet Catalog including four new ones from NASA Kepler and the four new ones discovered by astronomers led by Mikko Tuomi from the University of Hertfordshire. Six out of these twenty planets are still unconfirmed. 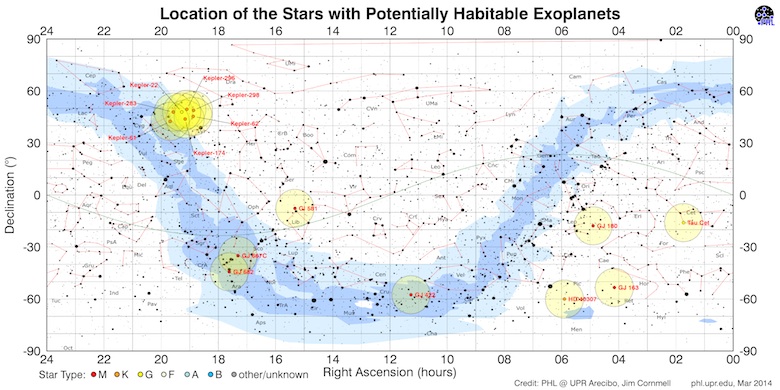 Figure 5. Location in the night sky of the now known fifteen stellar systems with potentially habitable worlds. New ones are Gliese 180 in the constellation of Eridanus, Gliese 422 in Carina, and Gliese 682 in Scorpius. Click the image to enlarge. Credit: PHL @ UPR Arecibo, Jim Cornmell.
Article Credit: The Planetary Habitability Laboratory @ UPR Arecibo (phl.upra.edu)