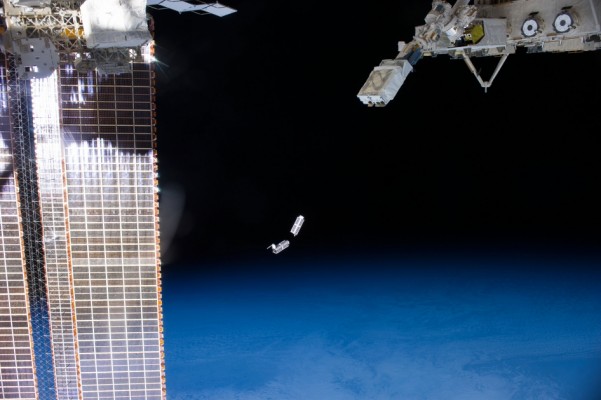 Technology allows us to put more and more capability in smaller and smaller packages. This week a set of Cubesats was placed into orbit by the ISS. A set of NanoRacks CubeSats is photographed by an Expedition 38 crew member after deployment by the NanoRacks Launcher attached to the end of the Japanese robotic arm. The CubeSats program contains a variety of experiments such as Earth observations and advanced electronics testing. International Space Station solar array panels are at left. Earth’s horizon and the blackness of space provide the backdrop for the scene.

Two sets of CubeSats were deployed late Wednesday, Feb. 26 and early Thursday, Feb. 27, leaving just two more launches to go of the 33 CubeSats that were delivered to the station in January by Orbital Sciences’ Cygnus cargo ship. The latest CubeSats were sent on their way at 8:50 p.m. EST Wednesday and 2:40 a.m. Thursday. CubeSats are a class of research spacecraft called nanosatellites and have small, standardized sizes to reduce costs.

Related: Photos of Earth from Smartphones in Orbit

Two final batches of CubeSats are set for deployment at 11:20 p.m. Thursday and 2:30 a.m. Friday, but more are scheduled to be delivered to the station on the second Orbital commercial resupply mission in May.