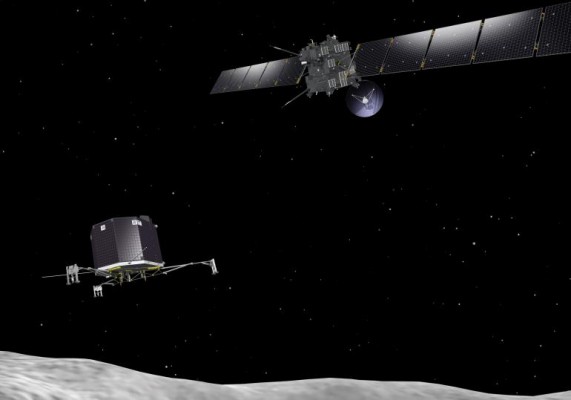 Artist’s concept of the Rosetta satellite and the Philae lander. ESA–J. Huart

For the first time mankind is about to orbit with a comet and land on it, complement of the European Space Agency. Rosetta was launched on March 2, 2004, and after several Earth gravity assists, the satellite entered hibernation on June 8, 2011. Once it is awake it will meet with comet 67P/Churyumov–Gerasimenko. It will arrive at the comet in August. Rosetta will follow the comet as it orbits around the sun, but ESA’s most important mission will be deploying the Philae lander in November.

The spacecraft will perform a maneuver during which the thrusters fire for several hours to slow the relative drift rate of the spacecraft and comet to about 25 meters per second. The relative speeds of the spacecraft and comet will gradually be reduced, slowing to 2 meters persecond after about 90 days. The orbiter will take highly detailed images of the comment in order to select a landing site for the probe. In November the lander will be released and will land on the comet at a speed of about 1 meter per second..or about walking speed.

Two harpoons will be fired into the comet to prevent the lander from bouncing off. Additional drills are used to further secure the lander on the comet. Once attached to the comet, expected to take place in November 2014, the lander will begin its science mission:

When the lander arrives the comet will not yat have started to heat and vent. The lander will observe the life of the comet as it changes and begins to vent gas and particles forming it’s characteristic tail. “We are going to be in the cometary catbird seat on this one,” said Claudia Alexander, project scientist for U.S. Rosetta from NASA’s Jet Propulsion Laboratory in Pasadena, Calif. “To have an extended presence in the neighborhood of a comet as it goes through so many changes should change our perspective on what it is to be a comet.”

“All the instruments aboard Rosetta and the Philae lander are designed to work synergistically,” said Sam Gulkis of JPL, the principal investigator for the Microwave Instrument for Rosetta Orbiter. “They will all work together to create the most complete picture of a comet to date, telling us how the comet works, what it is made of, and what it can tell us about the origins of the solar system.”