SMILE, Cassini to take picture of Earth from Saturn 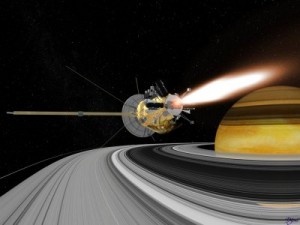 The Cassini spacecraft which recently celebrated 15 years of success will take a picture of Earth on July 19, 2013. The Earth will appear as a small, pale blue dot between the rings of Saturn in the image,

“While Earth will be only about a pixel in size from Cassini’s vantage point 898 million (1.44 billion kilometers) away, the team is looking forward to giving the world a chance to see what their home looks like from Saturn,” said Linda Spilker, Cassini project scientist at NASA’s Jet Propulsion Laboratory (JPL) in Pasadena, Calif. “We hope you’ll join us in waving at Saturn from Earth, so we can commemorate this special opportunity.”

Cassini will begin taking images which will make up the mozaic at 5:27 p.m. EDT (2:27 p.m. PDT or 21:27 UTC) and end about 15 minutes later, all while Saturn is eclipsing the sun from Cassini’s point of view. At the time of the photo, North America and part of the Atlantic Ocean will be in sunlight.

In this image the Earth will appear in natural color, as human eyes would see it. It also will be the first to capture Earth and its moon with Cassini’s highest-resolution camera. The probe’s position will allow it to turn its cameras in the direction of the sun, where Earth will be, without damaging the spacecraft’s sensitive detectors.

“Ever since we caught sight of the Earth among the rings of Saturn in September 2006 in a mosaic that has become one of Cassini’s most beloved images, I have wanted to do it all over again, only better,” said Carolyn Porco, Cassini imaging team lead at the Space Science Institute in Boulder, Colo. “This time, I wanted to turn the entire event into an opportunity for everyone around the globe to savor the uniqueness of our planet and the preciousness of the life on it.”

“Looking back towards the sun through the rings highlights the tiniest of ring particles, whose width is comparable to the thickness of hair and which are difficult to see from ground-based telescopes,” said Matt Hedman, a Cassini science team member based at Cornell University in Ithaca, N.Y., and a member of the rings working group. “We’re particularly interested in seeing the structures within Saturn’s dusty E ring, which is sculpted by the activity of the geysers on the moon Enceladus, Saturn’s magnetic field and even solar radiation pressure.”