SpaceX rocket hovers 80 meters, but is it a good idea? 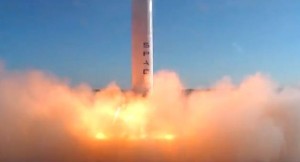 There is an old saying, he bit off more than he could chew. This could be the case with the concept being explored by SpaceX and their new rocket technology. In the most recent test on March 4th they lifted the Grasshopper rocket 80.1 meters (262.8 feet), hovering for approximately 34 seconds. You can see the video of this test below.

While they may have the money to pull this demonstration flight off it is not clear the concept will work, or will be worth while. The ability to hover and land a rocket has been around for decades and while interesting and somewhat fun in a Buck Rogers sort of way it is actually not all that great of an idea. The fuel needed to land the rocket and the associated weight reduce the useful payload sent into space. Smaller payloads also mean more launches are needed to get a given mass to space, and therefore more risk of failure. In addition the likelihood of failure is increased. A rocket engine and the avionics needed to land are much more complex than a heat shield and a parachute. According to the SpaceX web site “the vast majority of launch vehicle failures in the past two decades can be attributed to three causes: engine, stage separation and, to a much lesser degree, avionics failures. An analysis of launch failure history between 1980 and 1999 by Aerospace Corporation showed that 91% of known failures can be attributed to those subsystems”. With that in mind 2 of the three major causes for launch failures would now also be involved in landing.

“With Grasshopper, SpaceX engineers are testing the technology that would enable a launched rocket to land intact, rather than burning up upon reentry to the Earth’s atmosphere,” company officials stated after the rocket’s fourth test flight.

The concept is something like this. The rocket launches and the first stage drops off, the first stage engine then fires again and lands it gently, ready to be cycled for the next launch. The second stage then propels itself into space, delivers it’s payload, the returns back to Earth, first using a heat shield to decelerate and then slowing using the engine to land. Ready to be refurbished and reused. Seems like a great idea…until actual physics is involved. The reality is that the amount of fuel that is needed to be carried in order to accomplish is prohibitive. Think about it, all of the fuel needed to take off, and the return to Earth must be carried aboard the vehicle. The weight of all this fuel simply does not allow this concept to work…that is why it has never been done. NASA uses parachutes for a reason.  Why use rockets and fuel for the first stage landing when a simple reliable parachute will work? They are cheap, simple, effective, and reliable. This is one time where NASA has embraced the KISS (Keep It Simple Stupid) principal. Maybe not so much by choice as by necessity. There really is no other solution that works with chemical rocket technology. If you notice the SpaceX video, the are using a chemical rocket. This method is also very complex, and complexity leads to failure.

For whiz bang SpaceX gets a 10 for their effort..for the actual applicability well, not so much. They should get a parachute and spend the money somewhere else.

7 thoughts on “SpaceX rocket hovers 80 meters, but is it a good idea?”