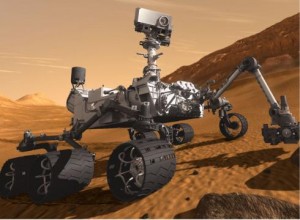 Exciting news or a Big Yawn?

Tomorrow NASA is going to make an announcement related to a finding by the Mars Rover and the SAM instrument.  As one of the NASA scientists said they will have an announcement “for the history books“. This has garnered a large amount of attention in the media recently but what will this really mean. Will our place in the universe change tomorrow or will it amount to a big yawn. NASA has been very hush hush about this announcement which itself says something. If the scientist who made the “for the history books” quote was just to excited and there was not actually anything substantial one would think NASA would have said something by now toning down his words. Sometimes what a scientist thinks is exciting and what the rest of the world thinks is exciting can be different. He has dedicated years of his life to the project and it could be what he thinks is historic at some level may be, but it may not be earth shattering to the rest of us. The fact that nothing official has been said, and NASA is taking this long to analyze the data, points towards the exciting end of the announcement scale.

What could the announcement be? Methane on mars? They already said that the rover has not detected any significant amounts. Even if it did that is nothing for the history books as we already know that there are seasonal variances in the amount of methane on Mars. If this is it, which it most likely is not,  it’s a big yawn. Other more substantial proof of life? Curiosity’s SAM instrument is the largest most sophisticated laboratory ever placed on the surface of another planet. If we were ever going to find anything this would be the time and SAM would be the tool to do it.

It is like the day before Christmas for people interested in the search for life. Anticipation runs high as do hopes we have finally, definitively found it. We will see if the KnowledgeOrb headline tomorrow reads “Life on Mars!” Lets hope it does!