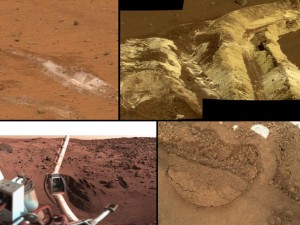 A Sampling of Martian Soils
This collage shows the variety of soils found at landing sites on Mars. The elemental composition of the typical, reddish soils were investigated by NASA’s Viking, Pathfinder and Mars Exploration Rover missions, and now with the Curiosity rover, using X-ray spectroscopy. The investigations found similar soil at all landing sites. In addition, the soil was usually unchanged over the traverse across the Martian terrain made by both Mars Exploration Rovers.
The Mars Exploration Rover Spirit’s landing region in Gusev Crater is seen in both pictures at top; Viking’s landing site is shown at lower left; and a close-up of Curiosity’s Gale Crater soil target called “Portage” is at lower right.
In Gusev Crater, several white subsurface deposits were excavated with Spirit’s wheels and found to be either silica-rich or hydrated ferric sulfates.
Image credit: NASA/JPL-Caltech

NASA held a news conference today to reveal what one of the program scientists said was an announcement “for the history books”.  Well……..if the history books are about how history repeats itself then they are right. NASA announced the findings in this NASA Press Release that they have found  The lander found water and one-carbon organics. The water seen by SAM does not mean the drift was wet. Water molecules bound to grains of sand or dust are not unusual, but the quantity seen was higher than anticipated. SAM tentatively identified the oxygen and chlorine compound perchlorate. This is a reactive chemical previously found in arctic Martian soil by NASA’s Phoenix Lander. Reactions with other chemicals heated in SAM formed chlorinated methane compounds — one-carbon organics that were detected by the instrument. The chlorine is of Martian origin, but it is possible the carbon may be of Earth origin, carried by Curiosity and detected by SAM’s high sensitivity design

For those of you old enough you may remember Viking also found signs of organics/life in it’s experiments that were discounted as error or contamination. Some of the Viking team disputed and to this day they claim they found life. Recently the Viking mission data was re-analyzed with the new knowledge from the Phoenix Lander and perchlorate being on the surface. The new analysis was done and the results show a high probability the Viking lander actually found life….maybe 35 years from now the same will be done with MSL.

All is not lost, the mission will press on and perhaps find some more definitive proof that life does, or at some time in the past did exist. For now at least the hunt goes on.