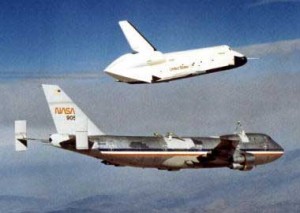 The iconic image original glide test of  Shuttle Enterprise as it floated away from the 747 almost forty years ago featured this specially equipped 747 transport.

From the beginning of the shuttle program to what is now the end of an era this plane served the program well. NASA’s Space Shuttle Carrier Aircraft (SCA) No. 905, departed NASA’s Dryden Flight Research Center on Oct. 24, 2012 for the final time, ending a 38-year association with the NASA field center at Edwards. The modified Boeing 747 jetliner flew from Dryden to Ellington Airport in southeast Houston, where the big Boeing jet will be retired and eventually placed on public display.

One thought on “Shuttle 747 transport leaves Dryden for final time”