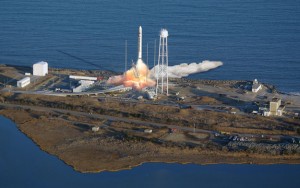 Exciting news for people in the northeast U.S. who want to see a rocket launch to the space station. The Mid-Atlantic Regional Spaceport (MARS) will offer full-service launch facilities for commercial, government, scientific and academic users both foreign and domestic.The first launch from this new facility will be an  Orbital Sciences Corporation Antares rocket which started its journey to the launch pad of the nation’s newest spaceport. On Monday they rolled the first stage out to the pad.

Since 1942 approximately 16,000 smaller rockets have launched out of Wallops. Two years ago the commonwealth invested $145 million to build a new launch facility designed to launch larger medium sized rockets.  This is the first time people in the northeast can see a launch to the spacestation without traveling to Florida. The launches should be visible from as far away as Washington D.C.  Orbital continues a series of tests at the launch pad that will lead to a planned flight test later this year, no launch date has been announced yet. A demonstration mission to the space station to test both the Antares rocket and Cygnus cargo spacecraft in the coming months is planned. The milestones will be completed prior to beginning formal cargo delivery missions to the space station under NASA’s CRS agreement.

“Today’s rollout of Orbital’s Antares test vehicle and the upcoming SpaceX mission are significant milestones in our effort to return space station resupply activities to the United States and insource the jobs associated with this important work,” said NASA Associate Administrator for Communications David Weaver. “NASA’s commercial space program is helping to ensure American companies launch our astronauts and their supplies from U.S. soil.”