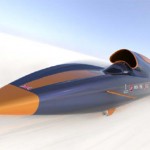 But what is the point. The British project known as Bloodhound SCC is going for 1000 mph….look out Speed Racer. The “car” is actually just a jet plane that does not leave the ground. This one is a little different though as it is powered by a hybred solid rocket/jet engine combo with the equivilent of 40,000 horsepower. Jets and rockets have long ago broken the sound berrier and we have also broken the land speed sound berrier in another “car” (really a jet). Lets face it there is no real practicle use for this and it is entertainment. Long ago the thought of a jet engine car/plane speeding in a straight line really really fast just started to seem kind of silly. Of course we hope no one gets killed in the attempt but there is definately a greater than zero chance of the pilot … opps I me driver…getting hurt.

There is on aspect of the program that does have some real application. The program is designed to inspire youth and engineering education which is of course a noble cause. The engine test this week was also the largest rocket engine fired on British soil for 20 years. See the video below of the engine test.

Good luck Bloodhound SCC team, breaking 1000 mph is not going to be easy!!