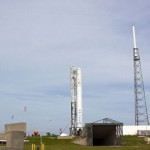 Image above: The Space Exploration Technologies, or SpaceX, Falcon 9 rocket is in position for a wet dress rehearsal at Space Launch Complex 40. Credit: NASA

NASA – SpaceX and NASA continue to prepare for the company’s first Commercial Resupply Services, or CRS, mission to the International Space Station aboard the Dragon capsule. The SpaceX CRS contract with NASA provides for 12 cargo resupply missions to the station through 2015, the first of which is targeted to launch in October 2012. SpaceX became the first private company to berth a spacecraft with the space station in 2012 during its final demonstration flight under the Commercial Orbital Transportation Services, or COTS, program managed by NASA’s Johnson Space Center in Houston.