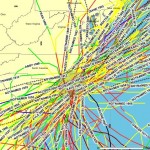 NOAA – Seeing where hurricanes have hit and how often is one of the best ways to bring home a powerful hurricane preparedness message. A NOAA website, Historical Hurricane Tracks, lets users insert their zip code and see a map that contains more than 150 years of Atlantic hurricane tracking data. The site also contains global hurricane data from as far back as 1842.

“Knowing more about local hurricane history can help communities better understand their vulnerabilities so they can take steps to be more resilient if a future hurricane strikes.” says David Eslinger, Ph.D., an oceanographer with the NOAA Coastal Services Center and one of the site’s developers.

In addition to the tracks of storms, the site provides insight to the increasing numbers of the U.S. citizens and infrastructure at risk for hurricanes, detailing population changes for U.S. coastal counties from 1900 to 2000. As the population continues to grow, so too has the number of storms with multi-billion dollars in damages to coastal infrastructure and property. Seven of the top 10 costliest hurricanes in U.S. history have occurred in the past eight years, including seventh ranked Irene last August with $15.8 billion in damages.

The site’s popularity with the public was evident as Hurricane Irene bore down on the U.S. East Coast. Tens of thousands of people used Historical Hurricane Tracks to compare the National Hurricane Center’s projected path of Irene with past storms. User traffic peaked at over 19,000 visits on August 26, the same day Irene swirled off the North Carolina coast heading towards New York City while saturating the East Coast and New England and leaving millions without power.

Increasing numbers of global extreme storm events has added another dimension to the site as the developers, in response to user requests, have added non-U.S. data. The global tropical cyclone data feature were collected from agencies in every ocean basin and processed through the International Best Track Archive for Climate Stewardship (IBTrACS), an effort managed by NOAA’s National Climatic Data Center.

Developed by the NOAA Coastal Services Center in partnership with NOAA’s National Hurricane Center and the agency’s National Climatic Data Center, Historical Hurricane Tracks allows users to search by place name, storm name or year, or latitude and longitude points. With the search results, users can generate a map showing the track of the storm or storms accompanied by a table of related information.