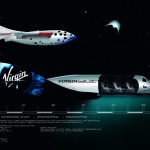 Virgin Galactic   had a successful drop test if its passenger-carrying suborbital space vehicle, SpaceShipTwo (SS2) on June 26, 2012. They report on there website that they have had seven successful test flights as well as three full duration rocket motor firings thus far. They are on track for a powered flight by the end of this year.

As can be seen in the image of Space Ship one and Space Ship two, this new vehicle is much larger than the original and is designed to carry more passengers.

In this recent test White Knight two dropped SS2 from an altitude of 51,000 feet. This is an exciting time to watch as they ramp up activity in order to test these new systems and eventually have paying customers take rides on their space ships. Scaled Composites, the prime contractor for the spaceflight system executed these test flights.