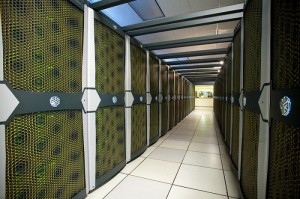 After extensive development and testing, NASA is making the NEX facility available to the research community for further research and development. With NASA’s state-of-the-art supercomputing capacity, researchers can use NEX to explore and analyze large Earth science data sets in hours rather than months. Scientists can produce complex, interdisciplinary studies of world phenomena and share their findings instantly on the NEX platform.

“Because of the large volume of high-resolution Landsat data, scientists who wanted to study the planet as a whole prior to NEX needed to invest tremendous amounts of time and effort to develop high-end computational methods rather than focus on important scientific problems,” said Tsengdar Lee, high-end computing program manager at NASA Headquarters in Washington. “NEX greatly simplifies researchers’ access to and analysis of high-resolution data like Landsat.”

This new facility boasts a large collection of global data sets and analysis tools from NASA and other agencies, including surface weather records, topography, soils, land cover and global climate simulations. Using NEX, scientists now can fit Landsat scenes together like a giant jigsaw puzzle to create snapshots of global vegetation patterns containing more than a half-trillion pixels in less than 10 hours. These global vegetation products, referred to as the Normalized Difference Vegetation Index, complement the more standard products from the Moderate Resolution Imaging Spectroradiometer on NASA’s Aqua satellite but with 10 times higher resolution.

“The science community is under increasing pressure not only to study recent and projected changes in climate that likely impact our global environment and natural resources, but also to design solutions to mitigate, or cope, with the likely impacts,” said Rama Nemani, a senior Earth scientist at NASA’s Ames Research Center in Moffett Field, Calif. “We want to change the research paradigm by bringing large data holdings and supercomputing capabilities together, so researchers have everything they need in one place.”

Developed by a team at Ames, NEX combines Earth-system modeling, remote-sensing data from NASA and other agencies, and a scientific social networking platform to deliver a complete research environment. Users can explore and analyze large Earth science data sets, run and share modeling algorithms, collaborate on new or existing projects and exchange workflows and results within and among other science communities.

Scientists believe costs and time associated with research development may be reduced significantly by allowing NEX members to collaborate instantly in this type of large-scale supercomputing work environment. For example, NEX may relieve researchers from redundantly retrieving and integrating data sets and building modeling analysis codes.

NEX uses Landsat data, which constitute a large collection of images collected over 40 years by a series of satellite sensors. The enhanced collection of Landsat data gives scientists the opportunity to study and understand changes on a planetary scale, looking at one-quarter acre at a time.

NASA, in cooperation with the Interior Department and its science agency, the U.S. Geological Survey, launched the first Landsat satellite in 1972. The resulting 40-year archive of Earth observations from the Landsat fleet supports the improvement of human and environmental health, biodiversity, energy and water management, urban planning, disaster recovery and crop monitoring. The Landsat program is jointly managed by NASA and the Interior Department.
RELEASE : 12-248