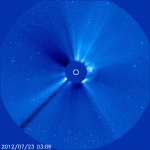 Sunspot 1520 may have turned away from earth but it is still very active. On July 23rd it erupted a CME that sent matter speeding away from the sun at 7.6 million miles per hour (3400 km/sec). This is a very rare occurance that happens only once or twice a decade. You may remember that AR1520 was very active when it was pointed at earth earier this month. This event is not geoeffective due to the fact it was not directed at earth. If it had been we would have seen some real fireworks and the storms it would have caused would have been significant. While spectacular this particular event will miss all of the solar systems inner planets which is actually good news for missions like the Mars Science Lab Courosity rover.