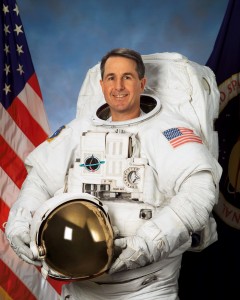 HOUSTON — NASA astronaut Stephen Robinson has left the space agency. Robinson ends his 36-year NASA career as a veteran of three spacewalks with more than 48 days of spaceflight experience. Robinson will become a professor at the University of California at Davis in the fall of 2012. His last day at NASA was June 30.

Robinson began work with NASA as a cooperative education student in 1975 at the agency’s Ames Research Center at Moffett Field, Calif. He was selected for the astronaut corps in 1995. Robinson served as a mission specialist on four spaceflights, including space shuttle missions STS-85 in 1997, STS-95 in 1998, STS-114 in 2005 and STS-130 in 2010. On his second spaceflight, Robinson was one of Sen. John Glenn’s crewmates during Glenn’s historic return to space after 36 years.

His third flight was NASA’s 2005 return to flight mission after the loss of shuttle Columbia in February 2003. During STS-114, Robinson performed the only in-flight spacewalk to repair of a shuttle’s heat-shield. During his final spaceflight, Robinson orchestrated the spacewalks and the complex robotic installation of the Tranquility node and cupola onto the International Space Station.

“Steve will be sorely missed by the Astronaut Office,” said Janet Kavandi, director of Flight Crew Operations. “He was a fellow classmate, and I will personally miss his ever-positive attitude and smiling face. We wish him the best in his future endeavors, and we are confident that he will be a positive influence and wonderful mentor to inquisitive minds at the University of California at Davis.”