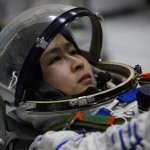 The Astronauts  automatically and manually docked  the Shenzhou 9 spacecraft to the orbiting Tiangong 1 space module. The docking represents an important milestone, and the accomplishment of a key capability, on the Chinese roadmap towards establishing Space Station towards the end of the decade.