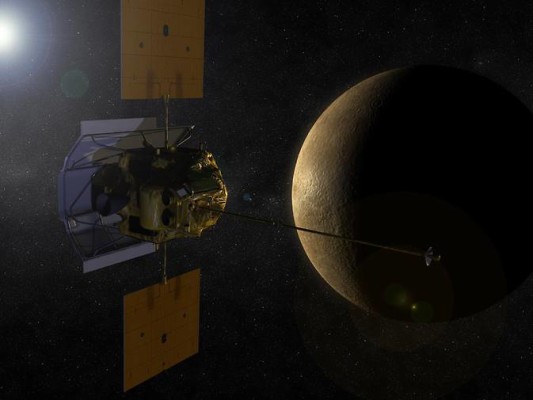 (NASA) – NASA will hold a media and public event at 1 p.m. EDT on Thursday, April 16, to share scientific findings and technical accomplishments of the agency’s MErcury Surface, Space ENvironment, GEochemistry, and Ranging (MESSENGER) spacecraft.
After more than 10 years in space, the highly successful mission will come to an end when it is expected to collide into Mercury at a speed of more than 8,750 miles per hour (3.91 km/sec) near the end of this month.
The event will take place in the NASA Headquarters’ James E. Webb Auditorium, 300 E Street, S.W., Washington, and will be carried live on NASA Television and the agency’s website.
Launched in August 2004, MESSENGER traveled 4.9 billion miles (7.9 billion kilometers) – a journey that included 15 trips around the sun and flybys of Earth once, Venus twice, and Mercury three times – before it was inserted into orbit around its target planet in March 2011. The spacecraft’s cameras and other sophisticated, high-technology instruments have collected unprecedented images and made other observations. Mission managers are preparing to impact Mercury’ surface in the next couple weeks.