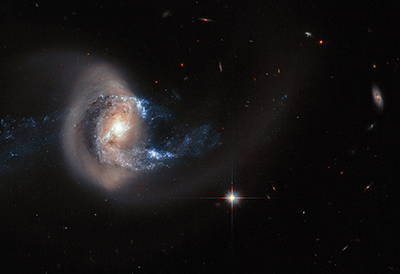 This NASA Hubble Space Telescope photo of NGC 7714 presents an especially striking view of the galaxy’s smoke-ring-like structure. The golden loop is made of Sun-like stars that have been pulled deep into space, far from the galaxy’s center. The galaxy is located approximately 100 million light-years from Earth in the direction of the constellation Pisces.

The universe is full of such galaxies that are gravitationally stretched and pulled and otherwise distorted in gravitational tug-o’-wars with bypassing galaxies.

The companion galaxy doing the “taffy pulling” in this case, NGC 7715, lies just out of the field of view in this image. A very faint bridge of stars extends to the unseen companion. The close encounter has compressed interstellar gas to trigger bursts of star formation seen in bright blue arcs extending around NGC 7714’s center.

The gravitational disruption of NGC 7714 began between 100 million and 200 million years ago, at the epoch when dinosaurs ruled the Earth. 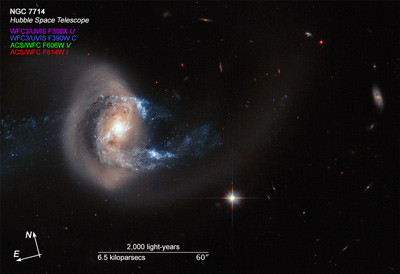 The image was taken with the Wide Field Camera 3 and the Advanced Camera for Surveys in October 2011.