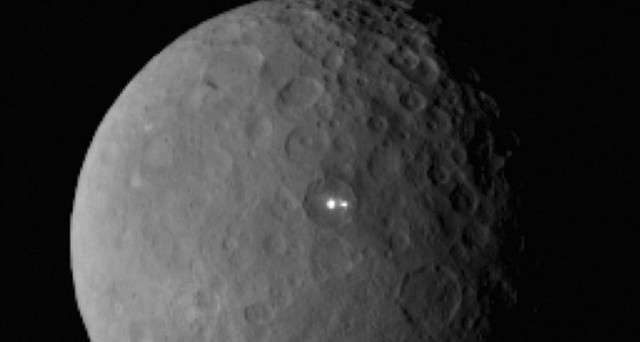 Picture above was taken February 19, from a distance of just under 29,000 miles – Credit NASA/JPL

As the Dawn spacecraft approaches the dwarf planet CERES it takes ever clearer images. In this image taken from 29,000 miles (46,000 kilometers) away there appears to be two bright lights on the surface. Could it be aliens, signals from beings on the surface, well that would be nice but not very likely. The origin of these lights is not yet known but most likely the reflection from ice, or even a possible volcanic ejection of water. The objects are reflecting roughly 40% of the light hitting them.

“This is truly unexpected and still a mystery to us,” said Andreas Nathues, lead investigator for the framing camera team at the Solar System Research in Gottingen, Germany, in a NASA statement. “The brightest spot [of the two] continues to be too small to resolve with our camera, but despite its size it is brighter than anything else on Ceres.

Using its ion propulsion system, Dawn will enter orbit around Ceres on March 6. As scientists receive better and better views of the dwarf planet over the next 16 months, they hope to gain a deeper understanding of its origin and evolution by studying its surface. The intriguing bright spots and other interesting features of this captivating world will come into sharper focus.