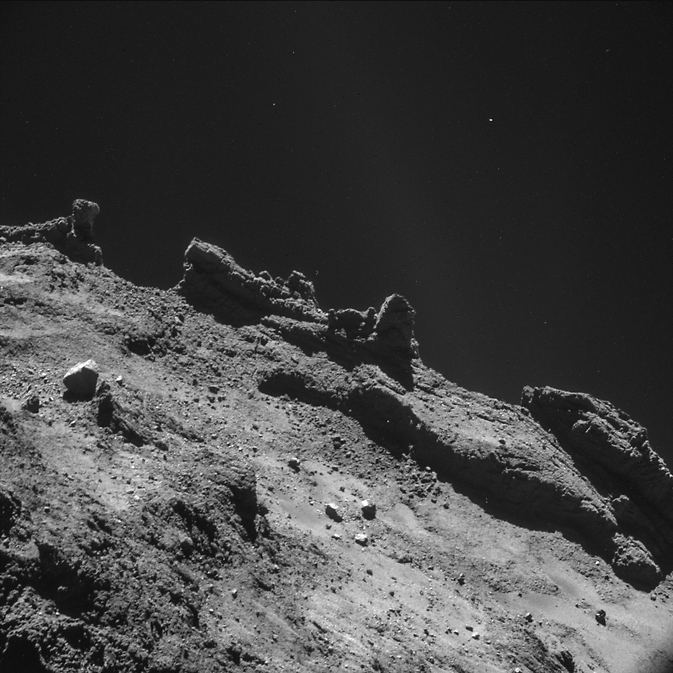 A jagged horizon of the nucleus of comet 67P/Churyumov-Gerasimenko appears in this image taken by the navigation camera on the European Space Agency’s Rosetta spacecraft during the second half of October 2014. The image was taken from a distance of less than 6 miles (10 kilometers) from the surface.
Image Credit: ESA/Rosetta/NAVCAM

The European Space Agency’s Rosetta spacecraft will deploy its harpoon laden comet lander, “Philae.” for a landing on comet 67P/Churyumov-Gerasimenko on Wednesday 11/12/1411:00 am.  This will be the first time mankind has attempted to soft land on the surface of a comet. “I know it sounds like something out of Moby Dick, but when you think about the gravity field of a comet, it makes a lot of sense to harpoon one,” said Art Chmielewski, project manager for the U.S. participation in Rosetta, from NASA’s Jet Propulsion Laboratory in Pasadena, California. “Comet 67P has approximately 100,000 times less gravity than Earth does. So, if you don’t want to float away, you have to go to extraordinary measures to attach yourself to its dusty surface. The Philae lander has two harpoons, shock-absorbing landing gear, and a drill located on each of the lander’s three feet. It even has a small, upward-firing rocket engine. All this to help keep it on the surface.”

The probes decent begins at 4:03 a.m. EST when Rosetta releases the 220-pound (100-kilogram) Philae from an altitude of about 14 miles (23 kilometers) from the center of the comet’s nucleus. As Philae descends, it will fall slowly without propulsion or guidance, gradually gathering speed in the comet’s weak gravitational field. During the seven-hour descent, the lander will take images and conduct science experiments, sampling the environment close to the comet. It will take a “farewell” image of the Rosetta orbiter shortly after separation, along with a number of images as it approaches the comet surface.

Once ton the surface it will begin a  two-and-a-half day science mission. Philae will take a panorama of its surroundings and perform on-the-spot analysis of the composition of the comet’s surface. It can drill samples from a depth of nine inches (23 centimeters) and feed them to the on board laboratory for analysis.

After the Philae landing is completed, Rosetta will begin the next major part of its mission, the escort phase. The orbiter will continue to maneuver around the comet at walking pace, collecting dust and gas samples and making remote sensing observations as the comet warms up and the nucleus and its environment evolve. The comet will reach its closest point to the sun (perihelion) in August 2015. Rosetta will then track the waning of activity as the comet heads back toward the cold, far reaches of the outer solar system, through 2015.

MIRO is designed to provide data on how gas and dust leave the surface of the nucleus to form the coma and tail that give comets their intrinsic beauty. Studying the surface temperature and evolution of the coma and tail provides information on how the comet evolves as it approaches and leaves the vicinity of the sun. MIRO has the ability to study water, carbon monoxide, ammonia and methanol.

Alice will analyze gases in the comet’s coma, which is the bright envelope of gas around the nucleus of the comet developed as a comet approaches the sun. Alice also will measure the rate at which the comet produces water, carbon monoxide and carbon dioxide. These measurements will provide valuable information about the surface composition of the nucleus.

Alice also will measure the amount of argon present, an important clue about the temperature of the solar system at the time the comet’s nucleus originally formed more than 4.6 billion years ago.

IES is part of a suite of five instruments to analyze the plasma environment of the comet, particularly the coma. The instrument will measure the charged particles in the sun’s outer atmosphere, or solar wind, as they interact with the gas flowing out from the comet while Rosetta is drawing nearer to the comet’s nucleus.

“Landing a spacecraft on a comet is a remarkable challenge and we wish them well,” said Claudia Alexander, project scientist for the U.S. Rosetta project from JPL. “It is the overture, opening for what has already become an exciting mission of exploration. Whatever happens tomorrow, the main part of the Rosetta mission will continue with the Rosetta orbiter monitoring the comet as it sweeps through the inner-solar system.”

Comets are time capsules containing primitive material left over from the epoch when the sun and its planets formed. Rosetta’s lander will obtain the first images taken from a comet’s surface and will provide comprehensive analysis of the comet’s possible primordial composition by drilling into the surface. Rosetta also will be the first spacecraft to witness at close proximity how a comet changes as it is subjected to the increasing intensity of the sun’s radiation. Observations will help scientists learn more about the origin and evolution of our solar system and the role comets may have played in seeding Earth with water, and perhaps even life.

Rosetta is a European Space Agency mission with contributions from its member states and NASA. Rosetta’s Philae lander is provided by a consortium led by the German Aerospace Center, Cologne; Max Planck Institute for Solar System Research, Gottingen; National Center of Space Studies of France (CNES), Paris; and the Italian Space Agency, Rome. NASA’s Jet Propulsion Laboratory in Pasadena, California, a division of the California Institute of Technology, manages the U.S. participation in the Rosetta mission for NASA’s Science Mission Directorate in Washington.