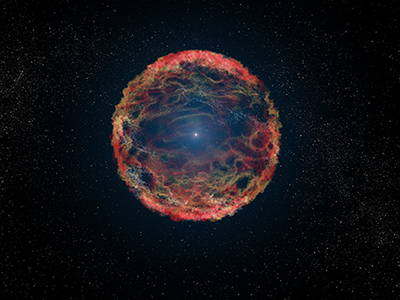 This is an artist’s impression of supernova 1993J, an exploding star in the galaxy M81 whose light reached us 21 years ago. The supernova originated in a double-star system where one member was a massive star that exploded after siphoning most of its hydrogen envelope to its companion star. After two decades, astronomers have at last identified the blue helium-burning companion star, seen at the center of the expanding nebula of debris from the supernova. The Hubble Space Telescope identified the ultraviolet glow of the surviving companion embedded in the fading glow of the supernova.
Credit: NASA, ESA, and G. Bacon (STScI

(NASA) – Astronomers using NASA’s Hubble Space Telescope have discovered a companion star to a rare type of supernova. This observation confirms the theory that the explosion originated in a double-star system where one star fueled the mass-loss from the aging primary star.

This detection is the first time astronomers have been able to put constraints on the properties of the companion star in an unusual class of supernova called Type IIb. They were able to estimate the surviving star’s luminosity and mass, which provide insight into the conditions that preceded the explosion.

“A binary system is likely required to lose the majority of the primary star’s hydrogen envelope prior to the explosion. The problem is that, to date, direct observations of the predicted binary companion star have been difficult to obtain since it is so faint relative to the supernova itself,” said lead researcher Ori Fox of the University of California (UC) at Berkeley.

Astronomers estimate that a supernova goes off once every second somewhere in the universe. Yet they don’t fully understand how stars explode. Finding a “smoking gun” companion star provides important new clues to the variety of supernovae in the universe. “This is like a crime scene, and we finally identified the robber,” quipped team member Alex Filippenko, professor of astronomy at UC Berkeley. “The companion star stole a bunch of hydrogen before the primary star exploded.”

The explosion happened in the galaxy M81, which is about 11 million light-years away from Earth in the direction of the constellation Ursa Major (the Great Bear). Light from the supernova was first detected in 1993, and the object was designated SN 1993J. It was the nearest known example of this type of supernova, called a Type IIb, due to the specific characteristics of the explosion. For the past two decades astronomers have been searching for the suspected companion, thought to be lost in the glare of the residual glow from the explosion.

Observations made in 2004 at the W.M. Keck Observatory on Mauna Kea, Hawaii, showed circumstantial evidence for spectral absorption features that would come from a suspected companion. But the field of view is so crowded that astronomers could not be certain if the spectral absorption lines were from a companion object or from other stars along the line of sight to SN 1993J. “Until now, nobody was ever able to directly detect the glow of the star, called continuum emission,” Fox said.

The companion star is so hot that the so-called continuum glow is largely in ultraviolet (UV) light, which can only be detected above Earth’s absorbing atmosphere. “We were able to get that UV spectrum with Hubble. This conclusively shows that we have an excess of continuum emission in the UV, even after the light from other stars has been subtracted,” said team member Azalee Bostroem of the Space Telescope Science Institute (STScI), in Baltimore, Maryland.

When a massive star reaches the end of its lifetime, it burns though all of its material and its iron core collapses. The rebounding outer material is seen as a supernova. But there are many different types of supernovae in the universe. Some supernovae are thought to have exploded from a single-star system. Other supernovae are thought to arise in a binary system consisting of a normal star with a white dwarf companion, or even two white dwarfs. The peculiar class of supernova called Type IIb combines the features of a supernova explosion in a binary system with what is seen when single massive stars explode.

SN 1993J, and all Type IIb supernovae, are unusual because they do not have a large amount of hydrogen present in the explosion. The key question has been: how did SN 1993J lose its hydrogen? In the model for a Type IIb supernova, the primary star loses most of its outer hydrogen envelope to the companion star prior to exploding, and the companion continues to burn as a super-hot helium star.

“When I first identified SN 1993J as a Type IIb supernova, I hoped that we would someday be able to detect its suspected companion star,” said Filippenko. “The new Hubble data suggest that we have finally done so, confirming the leading model for Type IIb supernovae.”

The team combined ground-based data for the optical light and images from two Hubble instruments to collect ultraviolet light. They then constructed a multi-wavelength spectrum that matched what was predicted for the glow of a companion star.

Fox, Filippenko, and Bostroem say that further research will include refining the constraints on this star and definitively showing that the star is present.

The results were published in the July 20 Astrophysical Journal.