Asteroid to pass close to Earth, the real story is we missed it. 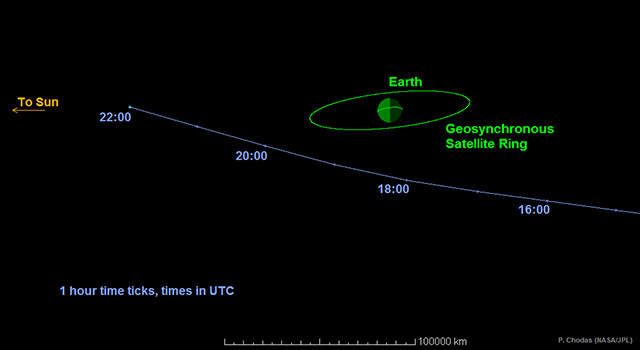 This graphic depicts the passage of asteroid 2014 RC past Earth on September 7, 2014. At time of closest approach, the space rock will be about one-tenth the distance from Earth to the moon. Times indicated on the graphic are Universal Time. Image credit: NASA/JPL-Caltech

A small asteroid will pass close to Earth on Sunday, it will pass at a distance of about 25,000 miles. In terms of the scale of the solar system this is almost a bulls eye. The asteroid designated 2014 RC, at closest approach 2:18 p.m. EDT will be roughly over New Zealand. The real story here is we did not know about it until August 31, 2014…or for less than a week. This shows how little notice we could get should an asteroid be on a direct path for Earth. If it had been headed for us there is actually nothing we could have done except maybe try to evacuate the area impacted by it.

This asteroid was discovered on the  August 31 by the Catalina Sky Survey near Tucson, Arizona, and then independently detected the following night by the Pan-STARRS 1 telescope in Hawaii.

We may not be effected by the asteroid this time but is orbit will bring it back in the area of Earth again in the future. Now that we have seen it we can monitor it for future close approaches, no threatening approaches have been seen in the orbit predictions so far.