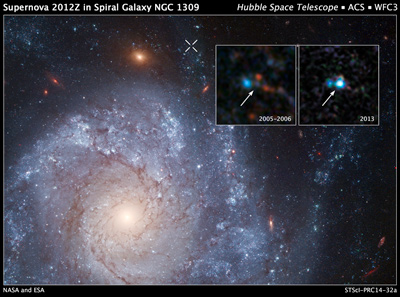 (NASA) – Astronomers using NASA’s Hubble Space Telescope for the first time have spotted a star system that later produced an unusual supernova explosion of a white dwarf, the stripped-down core of an ordinary star at the end of its life.

Examining archived Hubble images taken before the supernova, astronomers say they have detected the blue companion star of the white dwarf. The white dwarf slowly siphoned fuel from its companion, eventually igniting a runaway nuclear reaction in the dead star, and producing a weak supernova blast.

This particular supernova is classified as a Type Iax, a recently identified class of stellar explosion. These exploding stars are less energetic and fainter than Type Ia supernovae, which also originate from exploding white dwarfs in binary systems. Astronomers originally thought these weaker stellar blasts were unique Type Ia supernovae. So far, they have identified more than 30 of these mini-explosions, which occur at one-fifth the rate of Type Ia supernovae.

“Astronomers have been searching for decades for the progenitors of Type Ia’s,” said Saurabh Jha of Rutgers University in Piscataway, New Jersey. “Type Ia’s are important because they’re used to measure vast cosmic distances and the expansion of the universe. But we have very few constraints on how any white dwarf explodes. The similarities between Type Iax’s and normal Type Ia’s make understanding Type Iax progenitors important, especially because no Type Ia progenitor has been conclusively identified. This discovery shows us one way that you can get a white dwarf explosion.”

The team’s results will appear tomorrow in the journal Nature.

The weak supernova, dubbed SN 2012Z, was found in the Lick Observatory Supernova Search in January 2012. Fortuitously, Hubble’s Advanced Camera for Surveys also observed the supernova’s host galaxy, NGC 1309, in 2005, 2006, and 2010, before the supernova outburst. NGC 1309 resides 110 million light-years away. Curtis McCully, a graduate student at Rutgers and lead author of the team’s paper, reprocessed the pre-explosion images to make them sharper and noticed an object at the supernova’s position. “I was very surprised to see anything at the supernova’s location. We expected that the progenitor system would be too faint to see, like in previous searches for normal Type Ia supernova progenitors. It is exciting when nature surprises us,” McCully said.

The likelihood that the object detected was just a chance alignment unrelated to the supernova is less than one percent. After studying the object’s colors and computer simulations showing possible Type Iax progenitor systems, the team concluded that what they were seeing was most likely the light of a star that had lost its outer hydrogen envelope, revealing its helium core.

“Back in 2009, when we were just starting to understand this class, we predicted that these supernovae were produced by a white dwarf and helium star binary system,” said team member Ryan Foley of the University of Illinois at Urbana-Champaign, who helped identify Type Iax supernovae as a new class. “There’s still a little uncertainty with this Hubble study, but it is essentially validation of our claim.”

According to the team, one possible scenario for the oddball star system predicts that a seesaw game ensues between the stars, with each star donating mass to the other. The stars originally weighed about seven and four times that of our Sun, respectively. The more massive seven-solar-mass star evolves quickly, dumping its hydrogen and helium onto its smaller companion. Now slimmed down to just one solar mass, the once-more- massive star is left with a carbon and oxygen core, becoming a white dwarf. The companion star, which began with just four solar masses, is now bulked up and begins to evolve quickly, growing larger and engulfing the white dwarf. The outer layers of this “combined” star are ejected, leaving behind the white dwarf and the two-solar-mass helium core of the companion star. The white dwarf is still siphoning matter from its partner until it becomes unstable and explodes as a mini-supernova, ejecting about half a solar mass of material.

Unlike a normal Type Ia supernova, which destroys its white dwarf, the explosion of a Type Iax is thought to leave behind a battered and bruised white dwarf. Since this dead star comes back to life as it explodes, astronomers have nicknamed it a “zombie star.”

The team acknowledges that they can’t totally rule out other possibilities for the object’s identity, including the possibility that it was simply a single, massive star that exploded as a supernova. To settle those uncertainties and confirm their hypothesis, the team plans to use Hubble again in 2015 to observe the area when the supernova’s light has dimmed enough to show any possible zombie star and helium companion.

The astronomers already have seen the aftermath of one Type Iax supernova blast. Hubble images taken of supernova 2008ha in January 2013, more than four years after it exploded, show an object at the supernova’s location. The supernova resides in the galaxy UGC 12682, located 69 million light-years away. The object could be either the zombie remnant star or the companion. Based on the object’s colors, the team suggests in a separate paper that the star is the companion, weighing more than three solar masses. It is significantly less luminous and redder than the SN 2012Z progenitor system. The findings will be published in the Aug. 11 issue of The Astrophysical Journal.

“SN 2012Z is one of the more powerful Type Iax supernovae and SN 2008ha is one of the weakest of the class, showing that Type Iax systems are very diverse,” explained Foley, the SN 2008ha paper’s lead author. “And perhaps that diversity is related to how each of these stars explodes. Because these supernovae don’t destroy the white dwarf completely, we surmise that some of these explosions eject a little bit and some eject a whole lot.”

The astronomers hope their new findings will spur the development of improved models for these white dwarf explosions and a more complete understanding of the relationship between Type Iax and normal Type Ia supernovae and their progenitors.