Most UFO reports are well…unbelievable claims with fuzzy images that lead you to once again realize your time has been wasted, Well this is not the case This report was seen clearly by several people who all took clear picture from vastly different locations. On August 11, 2014, many people in Houston, Texas witnessed this event and managed to capture it in photos and video.

News Report of the UFO Sighting.

What makes this event more unusual is it is indeed unexplained. It is not obvious what this object, or objects are. I am nor sure why but it does look like it could be flares dropped from a military aircraft. If an aircraft was dropping flares as it was flying in a circle it could indeed look like this. In some of the images the “craft” appears to change angles. That is not how flares would behave. It would have been nice to see if the lights 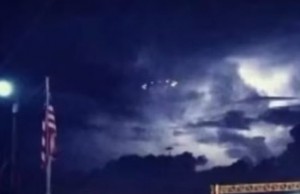 all appeared at once or lit up in a sequence which would lend credence to the military flare idea.

In any case it is interesting and is definitely something real. the images and videos were not made by a hoaxer on his PC as it was captured from many angles by many people. Could it be aliens…probable not. But it defiantly meets the criteria for a UFO. It is indeed unidentified. Could some group have done this in order to have some fun? That is not out of the realm of possibility either. It would not be easy but it could be done. A small plane, some flares, someone spotting on the ground and there you have it. The night this occurred the weather was bad so anyone in a small airplane would have had to deal with that as well, making it less likely.  Hopefully someone will come out and let people know what caused this. I tend to think it was a military aircraft. It is common for them to pull a high G turn as they drop flares to avoid heat seeking missiles. This simply could have been a pilot practicing….but maybe not. In any case have a look you be the judge and see what you think…I would not start stockpiling food to get ready for the pending invasion just yet.

One thought on “Finally an honest to goodness credible UFO report”