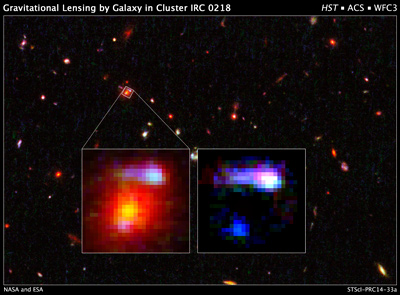 (NASA) – Astronomers using NASA’s Hubble Space Telescope have unexpectedly discovered the most distant cosmic magnifying glass, produced by a monster elliptical galaxy. Seen here as it looked 9.6 billion years ago, this monster elliptical galaxy breaks the previous record holder by 200 million years. These “lensing” galaxies are so massive that their gravity bends, magnifies, and distorts light from objects behind them, a phenomenon called gravitational lensing.

The object behind the cosmic lens is a tiny spiral galaxy undergoing a rapid burst of star formation. Its light has taken 10.7 billion years to arrive here. Seeing this chance alignment at such a great distance from Earth is a rare find.

Locating more of these distant lensing galaxies will offer insight into how young galaxies in the early universe built themselves up into the massive dark-matter-dominated galaxies of today. Dark matter cannot be seen, but it accounts for the bulk of the universe’s matter.

“When you look more than 9 billion years ago in the early universe, you don’t expect to find this type of galaxy-galaxy lensing at all,” explained lead researcher Kim-Vy Tran of Texas A&M University in College Station. “It’s very difficult to see an alignment between two galaxies in the early universe. Imagine holding a magnifying glass close to you and then moving it much farther away. When you look through a magnifying glass held at arm’s length, the chances that you will see an enlarged object are high. But if you move the magnifying glass across the room, your chances of seeing the magnifying glass nearly perfectly aligned with another object beyond it diminishes.”

Team members Kenneth Wong and Sherry Suyu of Academia Sinica Institute of Astronomy & Astrophysics (ASIAA) in Taipei, Taiwan, used the gravitational lensing from the chance alignment to measure the giant galaxy’s total mass, including the amount of dark matter, by gauging the intensity of its lensing effects on the background galaxy’s light. The giant foreground galaxy weighs 180 billion times more than our Sun and is a massive galaxy for its epoch. It is also one of the brightest members of a distant cluster of galaxies, called IRC 0218.

“There are hundreds of lens galaxies that we know about, but almost all of them are relatively nearby, in cosmic terms,” said Wong, first author on the team’s science paper. “To find a lens as far away as this one is a very special discovery because we can learn about the dark-matter content of galaxies in the distant past. By comparing our analysis of this lens galaxy to the more nearby lenses, we can start to understand how that dark-matter content has evolved over time.”

Although the elliptical galaxy is hefty, it is not as massive as many of today’s galaxies. Our Milky Way galaxy, for example, is three to four times more massive than the elliptical galaxy. Most of the Milky Way’s mass is locked up in dark matter. The lensing galaxy, however, is underweight in terms of its dark-matter content.

“The unusually small amount of dark matter in this massive, elliptical, lensing galaxy is very surprising,” Suyu said. “Other elliptical galaxies that are closer to us have much more dark matter and have inventories of stars that appear to be different from this super-distant lensing galaxy.”

The team suspects that the lensing galaxy will continue to grow over the next 9 billion years, gaining stars and dark matter by cannibalizing neighboring galaxies. “Recent studies suggest that these massive galaxies gain more dark matter than stars as they continue to grow,” Tran explained. “Astronomers had assumed that dark matter and normal matter build up equally in a galaxy over time. But now we know that the ratio of dark matter to normal matter changes with time. Our lensing galaxy will eventually become much more massive than the Milky Way and definitely will have more dark matter, too.”

Tran and her team were studying star formation in two distant galaxy clusters, including IRC 0218, when they stumbled upon the gravitational lens. While analyzing spectrographic data from the W.M. Keck Observatory in Hawaii, Tran spotted a strong detection of hot hydrogen gas that appeared to arise from a massive, bright elliptical galaxy. The detection was surprising because hot hydrogen gas is a clear signature of star birth. Previous observations had shown that the giant elliptical was an old, sedate galaxy that had stopped making stars a long time ago. Another puzzling discovery was that the young stars were at a much farther distance than the massive elliptical. “I was very surprised and worried,” Tran recalled. “I thought we had made a major mistake with our observations.”

The astronomer soon realized she hadn’t made a mistake when she looked at the Hubble images taken in blue wavelengths, which revealed the glow of fledgling stars. The images, taken by the Advanced Camera for Surveys and the Wide Field Camera 3, revealed a blue, eyebrow-shaped object next to a smeared blue dot around the big elliptical. Tran recognized the unusual features as the distorted, magnified images of a more distant galaxy behind the elliptical galaxy, the signature of a gravitational lens. But some team members were not convinced. They speculated that the two objects could be a nearby galaxy pair being shredded during a galaxy collision. Tran, however, only had a partial fingerprint; she needed conclusive evidence.

To confirm the gravitational-lens hypothesis, collaborator Ivelina Momcheva of Yale University, New Haven, Connecticut, analyzed Hubble spectroscopic data from the 3D-HST survey, a near-infrared spectroscopic survey taken with the Wide Field Camera 3. She compared that data with images from the Cosmic Assembly Near-infrared Deep Extragalactic Legacy Survey (CANDELS), a large Hubble deep-sky program. To paint an even more detailed picture of the system, Momcheva also added archival Hubble observations of the galaxy cluster. The data turned up another fingerprint of hot gas connected to the more distant galaxy.

“We discovered that light from the lensing galaxy and from the background galaxy were blended in the ground-based data, which was confusing us,” Momcheva said. “The Keck spectroscopic data hinted that something interesting was going on here, but only with Hubble’s high-resolution spectroscopy were we able to separate the lensing galaxy from the more distant background galaxy and determine that the two were at different distances. The Hubble data also revealed the telltale look of the system, with the foreground lens in the middle, flanked by a bright arc on one side and a faint smudge on the other — both distorted images of the background galaxy. We needed the combination of imaging and spectroscopy to solve the puzzle.”

The distant galaxy is too small and far away for Hubble to resolve its structure. Team members, therefore, reconstructed and analyzed the distribution of light in the object to infer its spiral shape. In addition, spiral galaxies are more plentiful during those early times. The Hubble images also reveal at least one bright compact region near the center. The team suspects that the bright region is due to a flurry of star formation and is most likely composed of hot hydrogen gas heated by massive young stars.

Team members calculated the lensing galaxy’s mass, including its dark-matter content, by first measuring the amount of light emitted by its stars. From that measurement, the astronomers obtained the mass of all the stars, which equals the amount of normal matter. Next, the team estimated the total mass by measuring how much the galaxy’s gravity bends and distorts light from the distant background galaxy. The astronomers then subtracted the stellar mass from the total mass to determine the amount of dark matter in the galaxy.

As Tran continues her star-formation study in galaxy clusters, she will be hunting for more signatures of gravitational lensing. “I’m definitely going to keep an eye out for more lensing galaxies, but they’re so rare that you would normally have to survey hundreds of clusters for them,” Tran said. “That’s why finding this one in such a small area of space was a complete shock.”

The team’s results appeared in the July 10 issue of The Astrophysical Journal Letters.